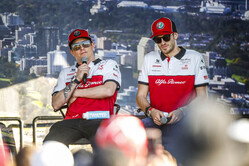 Each racing circuit is unique, like a fingerprint. Every venue has its defining characteristics, the elements that make it what it is, whether it is a set of corners, a set-up quirk or an architectural feature: in the cockpit, or walking through the paddock, this something is what reminds you, constantly, where you are.

Racing drivers, creatures of habit as they are, are very good at grasping what makes each track special. They feel it more than us common people, they adapt to it in the search of performance: as the years go by, each track forms an imprint in their brain, something they recall each time the visor is lowered. A head start, you may call it.

This is all the more true for Barcelona. Of all the tracks that make up the modern Formula One calendar, none is more so deeply ingrained in a driver's psyche than the Circuit de Barcelona-Catalunya. Day after day of winter testing, every mile pounded into the track leaves its mark. Just as water slowly carves a path through stone, so does this track embed itself in a driver's mind - every corner, every inch of tarmac.

The uphill, never-ending turn three, the fast turn nine, flat in qualifying with sparks sent flying into the sky, the final chicane, deceptively easy: a driver could drive the length of the circuit in a blindfold, so much it is second-nature to them.

The team, both in the garage and in the factory, knows the track just as well. Thousands of laps' worth of data forms a huge wealth of information to draw from: nowhere else is so deeply known.

Coming back to Barcelona, then, is like returning to a place you instinctively know. From the moment you cross the circuit's gates, you're confronted with sights and feelings you have experienced countless times before. From the moment you arrive, you're on familiar ground.

Frederic Vasseur, Team Principal: "The Circuit in Barcelona is definitely a known quantity and possibly the place we know best because of all the testing we've done there over the years. However, this year the conditions will be completely different from what we would be expecting in early May: Spain in August can be extremely hot and we will need to take the weather into account from the moment we set foot on track. It has been only a week since the second race in Silverstone and we cannot expect miracles in such a short time, but we will keep working hard to extract the most from our car and make progress in the midfield battle."

Kimi Raikkonen: "The last few races have shown we need to still find some performance, especially in qualifying, to be as competitive as we need to be. Barcelona is another chance to make a step forward although we have to be realistic: we may know the track well because of all the testing, but so does everyone else so I am not expecting massive surprises."

Antonio Giovinazzi: "Another weekend means another chance to improve our package. I believe our Saturday issues have masked some of the pace we have during the race, so we need to keep working on it to be in the fight for points right from the start of the race. We are at the end of the second triple header and it's important to keep focused and make the most of every little opportunity we may get."