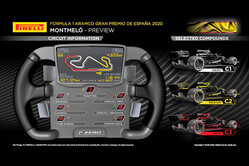 The Spanish Grand Prix is held at the familiar venue of the Circuit de Catalunya, but in the heat of mid-August for the first time. The three hardest compounds in the F1 tyre range have been selected: C1 as P Zero White hard, C2 as P Zero Yellow Medium, and C3 as P Zero Red soft.

This was actually the same compound choice as last year, because as well as being very hot in summer, the Montmelo circuit is always a big challenge for tyres at any time of year. The main reason for this is the high-energy corners such as Turn 3, which generate considerable G forces.

Although the teams all tested at Barcelona in February and March, there is set to be a dramatic temperature increase this weekend in the height of summer.

The Circuit de Catalunya was resurfaced two years ago, but the track has progressively matured since, bringing the surface more into line with how it used to be.

All but one of the drivers stopped for tyres twice last year, in a race that was affected by a lengthy safety car period towards the end. There were four different strategies in the top five, at a race in mid-May with track temperatures in excess of 40 degrees.

The planned test of 2021 prototype tyres during the first half-hour of FP2 in Spain has been rescheduled for a later grand prix, in order to give time to design some new prototypes for next year.

Mario Isola: "Barcelona concludes the second triple-header of this intense season to date. Although it will be the third time that the teams drive at the Circuit de Catalunya this year, following the two pre-season tests, the conditions they will encounter this weekend are likely to be very different: both because of the warm weather, and all the improvements made to the cars since winter testing.

"The expected high temperatures in Barcelona in mid-August will increase thermal degradation on a track already well-known for being tough on tyres, so it' going to be particularly important to manage them and control any overheating that affects traction.

"Free practice will be crucial to accurately establishing tyre behaviour under these challenging circumstances. With the current cars being faster than ever - as Silverstone recently confirmed - and the Spanish Grand Prix never being run in August before, this should be the most demanding race for tyres we’ve seen at the Circuit de Catalunya."