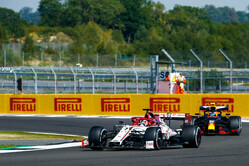 It was a valiant effort, one that could have brought home a reward on another day, but, this Sunday, it was not meant to be. The team gave everything and put up a combative display on a hot British summer day, but in the end all we had to show for it were a P15 and a P17.

The race had started in a positive fashion, with Antonio Giovinazzi producing yet another rocket start to leap four places into P15. Kimi Raikkonen, starting on hard tyres and targeting a one-stop race, emerged over the race distance, eventually dispatching two Haas and two Williams cars during the pit window and settling down in pursuit of the midfield pack. Both cars showed pace, something that seemed to be lacking on Saturday but is never in short supply on Sunday.

Unfortunately, in a race that claimed a single retirement - that of Kevin Magnussen, when the Dane was propping up the field - and without any Safety Car or VSC to shake up the strategy, there wasn't enough to make further inroads into the field.

We leave Silverstone after two events with the same points tally and in the same position - P8 - in the championship. We leave with work to do, but united in our pushing for that gap to be bridged. It's a long season, a relentless one - and we're not giving up the fight.

Frederic Vasseur, Team Principal: "Starting from the back, we knew we would have our work cut out today and our final positions reflect this. On such a race of low attrition and without massive shake-ups, P15 and P17, ahead of our most direct rivals in the standings, is pretty much all we could achieve. The team performed well and executed a clean race, but we have a lot of work still ahead of us before we can be where we want to be. We need to improve our qualifying pace to be able to start further up the grid: on Sunday we seem to have a good turn of speed and we can keep up the pace with all the others, but we can't really get anything out of it if we're starting that far back."

Kimi Raikkonen: "I am not happy to be out of the points, of course, even though our pace was not too bad. We did what we could but from P20 we could only make it up to 15th, so we are still missing something, especially on Saturday, to be in the fight for the top ten. We thought a one-stop was possible since yesterday so we tried: the tyres actually lasted well, I still had pretty good grip but had an awful lot of vibration and I had to slow down to avoid something breaking. In the end we leave with nothing, so we will need to come up with a better performance if we want to be in the fight for points."

Antonio Giovinazzi: "It wasn't the easiest of days: we tried our best, we chose to split the strategies to give ourselves a few more chances but in the end it was not enough to get points. Our race pace was once again better than what we showed on Saturday, so we can hope to make a step forward if we improve our performance in qualifying. We need to keep positive and work hard, as a team, to improve: it's not realistic to expect many things changing in a couple of days, but at least we are going to a new venue and we can hope it suits us a bit better than Silverstone."