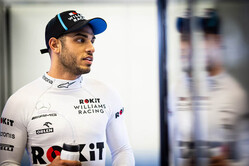 Israeli driver, Roy Nissany will make his FP1 debut this weekend when he drives George Russell's car in the opening session at Barcelona.

Nissany was revealed as the team's "official test driver" in January, sparking fears that the legendary Grove outfit might be taking the same path as some of those unscrupulous outfits in the past who, in exchange for a couple of million from a rich Daddy or faithful sponsor, would offer a young hopeful a couple of street demos in a three or four-year-old car along with a set of team wear, including their 'race' overalls, and some glossy pics to show the grandkids.

Defending the move, Claire Williams told Motorsport.com: "We're a team on a journey back to recovery, and we've got to have drivers that have the capability to understand what's going on. There's no point putting a driver in a car that you think isn't going to do a good job for you, and particularly when you're in the position that we're in.

"So clearly we're only going to take drivers that we know are going to be able to understand what's going on in the car," she continued, "to translate that to help with development and Roy proved that when he did the Abu Dhabi test for us at the end of the year."

Referring to the test, at which Nissany was slowest on both days, his best time 6.768s off the pace, Williams said: "It was all about bringing parts for evaluation, so it wasn't about setting the time sheets on fire. It was about doing the work that we asked him to do.

"I think that's to his credit as well," she added, "because some drivers can get in the car, who have never been in an F1 car before and go: 'Brilliant. This is my opportunity to show the world what I can do'. And then they go and crash it.

"That wasn't the programme, so really the lap times from that time, shouldn't matter, and they don't matter. But what I did see and what I learned from our engineers is that he was incredibly diligent. He came and he spent time with the team. He was a real team player who gave it everything that he needed to. He was around and he talked to people.

"That shouldn't be underestimated how important that can be, and particularly in a team and the situation that our team is in, to have those drivers that all of our people look at and can go, 'well they are putting the effort in, so I am going to put my effort in as well'."

Ahead of this weekend's Spanish Grand Prix the team revealed that Nissany, who finished 22nd in the 2018 F2 championship, having scored one point from twenty starts, and previously finished 4th in the 2016 Formula V8 3.5 series and 5th in the following year's World Series Formula V8 3.5, will drive George Russell's car in the opening session.

"We spent time with Roy in Abu Dhabi at the end of last year," said Dave Robson, the team's Head of Vehicle Performance, "and we know that he will immediately be up to speed and contributing to the important test plan on Friday."

"I am very keen to get in the car in Barcelona," said Nissany. "Driving an FP1 for the first time is a huge milestone for every driver, yet for me, it is also a national achievement to be carrying the Israeli flag.

"I have thoroughly been preparing for it with the team and I believe we can get great value out of it."