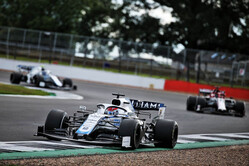 Both drivers ran a one-stop race, taking the opportunity to make their stops for the hard Pirelli tyre during the second Safety Car period on lap 12.

Dave Robson, Head of Vehicle Performance: Silverstone delivered another exciting race and whilst the safety cars bunched the field up, we can be reasonably pleased with our pace and the result. We now have a good baseline to use for some further tests next week when we return to Silverstone for the fifth race of the season.

Both drivers drove well today and, with the help of the experts in the garage, were able to manage their tyres to the end of the race whilst also dealing with the gusty conditions. There is still a lot of opportunity to push the car harder, but we are making good progress and will continue to do so next week.

As usual, the pit crew did a great job and the double stop that they were able to complete during the second safety car period helped us gain some valuable track position with both cars.

George Russell: This was the first race where we have been pretty fast, and our Sunday pace matched our Saturday, so that is positive. We have put a lot of effort in to focus on our pace today, so we are going in the right direction. After the Safety Car, the car felt strong. I managed to overtake Kimi (Raikkonen) and I caught Antonio (Giovinazzi). If we can maintain a good qualifying position ahead of the Alfa Romeos and the Haas' there's no reason we can't stay there on merit on a Sunday.

Nicholas Latifi: I think out of all the first four races so far, this was the race where in duration the car felt the best and the most predictable. The car felt alive and it was really nice to drive. In the first lap I made a mistake and went off and lost the track position, but besides that I had a lot of confidence to push. It was quite an enjoyable race, as it is much nicer when you are in the fight with other cars.