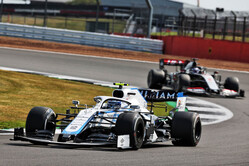 Dave Robson, Head of Vehicle Performance: It was a difficult day with tyre management dominating most of the afternoon. Rear tyre blistering caused a lot of vibration, which disturbed the drivers quite a lot and effected their visibility. We opted to make a third stop with both cars, and this was costly in our race with the cars around us. We need to go through the data and review the state of the tyres after each stint to see if the third stop was necessary and how we will manage the tyres in a similar situation in the future. If we can understand this then we make better use of the natural race pace of the car, which was definitely better this weekend even though it didn't show in the final race result.

It has been an interesting experience to have back-to-back races at such an awesome circuit and to get the opportunity to do so with different tyre combinations. However, without the fans here the atmosphere is just not the same and we look forward to coming back next year with a full crowd.

We fly to Spain in a few days and we must learn quickly from today and regroup ready to better exploit the car pace in Barcelona.

George Russell: It was a very difficult race. We made a really poor getaway and lost a couple of positions. It was difficult for everybody, but that's how it is in these tricky races sometimes. We have a lot to understand and review, it just wasn't our day. It's been two very different weekends at Silverstone. We need to understand why and what's changed between these two weekends and how that will help us moving forward. Nevertheless, it has been a good two weeks. Our qualifying pace is strong, so we just need to keep working on our Sunday pace.

Nicholas Latifi: It was a race that you had to adapt on the fly based on the situation and the strategy. The car was feeling great, even better than last weekend and it is the most confidence I have had behind the wheel in a race so far. I think the finishing position is not where we deserve to be, we came into some tyre issues with our rear left, which forced us into a third stop. I think we were just unlucky with the track position and being stuck behind some cars. I'm a bit disappointed, but the positive is that the pace is there.