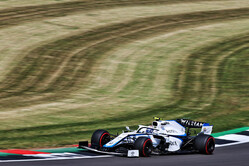 George Russell qualified 15th and Nicholas Latifi 18th for the 70th Anniversary Grand Prix. George made it into Q2 for the fourth time this year, clocking a time of 1:27.455.

Dave Robson, Head of Vehicle Performance: As expected, there were a lot of tyre combinations run throughout qualifying as everyone tried to balance their prospects for qualifying and the race. Nicholas and George opted for slightly different approaches to Q1, with Nicholas building on his FP3 momentum on the soft compound and George opting to mix compounds and spend a little extra time on the track.

We were expecting a tight battle with Haas for promotion to Q2, but on this occasion, both George and Grosjean made it through. We will start the race just behind the Haas but hope that our improving race pace will be enough to beat him in tomorrow's expected hot conditions.

The whole team worked well together again today and gave both drivers good opportunities to execute their respective strategies. In the end, the laptimes were heavily influenced by being lucky with the wind gusts during a timed lap; today Nicholas was less fortunate than George.

George Russell: I was pleased with that qualifying session and the lap felt good. It felt harder to drive than it did last week, the conditions are different, with new tyres and it is very windy here which makes it really tricky to drive. This week I had to give everything I had as it was very close, but I'm happy with the job. I think the mediums were the faster qualifying tyre today, which Romain used two sets of. We will have a new set to use tomorrow, so I think we are in a good position for the race.

Nicholas Latifi: I think we had a shot at getting into Q2, especially after FP3 we were looking strong and everything was feeling good. However, in qualifying the conditions were completely different and the car felt a little bit more unpredictable and a little bit more on edge. As a result, I just didn't do a good enough lap, probably down to experience. When the car was not in the window I one hundred percent needed, I struggled to put the lap together. Overall, I am quite disappointed as I really did think that we had the potential today.