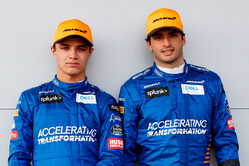 Carlos Sainz: "I can't wait to be racing at my home grand prix this weekend! However, it's disappointing not to have all the fans at the track and in my grandstand showing their support, but it's the right thing to do and it's important everyone can stay safe and watch at home. I'll be running a very special helmet this weekend as well, so watch out for it.

"It's been a very frustrating start to the season for me, but we keep pushing together as a team to maximise our performance. The competition around us is fierce and looks like it's taken a step forward, that's why losing those many points in the previous races hurts, but we're focused on ourselves as we head to Spain and know that we must keep pushing. A new race is a new opportunity. I'm determined to hit the ground running and get a good result on home soil!"

Lando Norris: "We had a difficult race last weekend, but I'm ready to get back in the car and go again in Barcelona. Spain is a track that has a bit of everything with a mix of low and high-speed corners. I'm expecting it to be a challenging race especially given the August heat. As a team we need to stay focused and take everything we've learned so far to produce the best performance on track this weekend.

"It feels like a long time ago since we were in Spain for pre-season testing. Finally, being able to race in Barcelona will give us a good idea of how the car's developed since February and what areas we still need to improve."

Andreas Seidl, Team Principal: "Having spent two weekends at Lando's and the team's home circuit, we now head to Spain for Carlos' home grand prix. Normally we'd expect to see thousands of passionate McLaren and Carlos fans in the grandstands cheering us on, and we'll miss their support, but holding the race behind closed doors is absolutely the right thing to ensure the safety of all our fans.

"All the teams know the Barcelona circuit well, given the two weeks of pre-season testing we completed here in February, but racing in August, with elevated ambient and track temperatures, will bring a new challenge. We've already seen at Silverstone what warmer temperatures can do to the tyres, so managing them well will be crucial over the weekend. With this in mind, it should be an exciting race for everyone watching back at home."