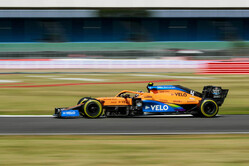 Lando Norris: "A tough race! I went forward one position, which I guess is the main thing, but it was tough. We really struggled with tyres, which we knew were going to be an issue coming into the race, but we struggled a lot more than we were expecting - or I was expecting - and that made it a lot more difficult for me. All of the cars ahead, as you could see from qualifying, were quicker than us. I think probably a lot of people were in the same boat as us, it was just very tricky to control."

Carlos Sainz: "A disappointing day for all of us. We managed to get a good start and after a very strong and long first stint we were in a good spot. Unfortunately, it looks like we had a gun failure in the pit-stop, which undid all the work done before the stop. It looks like we could've been on for some points today with the tyre strategy we had and with how we managed the race, but again I missed out on a good result for reasons beyond my control. We were unfortunate, but at the same time we need to keep digging and keep pushing because today is definitely another disappointing day for me personally, and for everyone in the team. We go again next weekend at my home race, so I hope we can recover there."

Andreas Seidl, Team Principal: "This was a tough Sunday. We had expected a challenging race after having struggled for pace all weekend in the hot ambient conditions. Finishing P9 with Lando was the best we could do with the performance of the car. Carlos was unfortunate to lose the opportunity to join his team-mate in the points, after an equipment failure during his pit-stop. Both drivers gave it their all on track; my thanks to them and the entire team for the commitment and hard work they have put in across these two weeks at Silverstone. We will reset tomorrow and try to find a better level of performance for Barcelona."