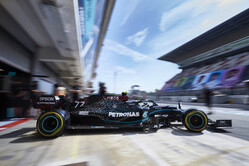 We're only at the start of the weekend, but, as expected, we're already seeing issues with the tyres... and with temperatures rising things aren't going to get any better.

Having handed his car over to FP1 debutante, Roy Nissany earlier, George Russell is back in the Williams this afternoon.

The lights go green but as has become the norm there is no rush to activity.

As more drivers head out it's an even mixture of hards and mediums.

Magnussen goes second with a 19.582, ahead of Giovinazzi, Raikkonen, Ocon, Latifi and Grosjean, as the Ferrari pair head out.

Norris consolidates his top spot with a 19.221.

Bottas heads out on hards as Latifi goes quickest in S1. The Canadian finally crosses the line at 20.147 to go sixth.

Vettel and Leclerc, both on mediums, post exploratory times, before the Monegasque goes quickest with a 19.050 and Vettel fourth (19.322).

Bottas (hards) goes second with a 19.095, as teammate Hamilton heads out.

The world champion is immediately on the pace, going top with a 17.970, albeit on the mediums.

Bottas improves to 18.590, but remains 0.620s off his teammate's pace, though that is about right considering that the Finn is on the harder rubber.

Twenty minutes in and Verstappen finally heads out.

"Grip level is pretty horrible," reports Bottas, who is told to pit.

Straight out of the box Verstappen goes second with an 18.397, like pace-setter Hamilton, the Red Bull driver is on mediums.

Other than third-placed Bottas, the next highest hard runner is thirteenth-placed Ocon.

"These tyres are just not working at all," moans Russell, "I just had a massive slide."

On the half-hour, Bottas is the first driver to make the switch to softs. There are only two other drivers on track, Norris and Ocon.

The Alfa Romeo pair head out on the red-banded tyres, as do Sainz and Stroll.

As was the case in Silverstone, Bottas is advised to go for a double cool down.

Bottas' second flying lap is, as expected, off the pace, while Hamilton goes top with a 16.883.

Ocon can only manage 8th (18.303), as the Bulls begin their first flyers on fresh softs.

"Can I go to the toilet when I come back to the pits?" asks Leclerc. "Yes you can," he is told.

Cameras pick up on Vettel really throwing his car around.

The race sims get underway and attention is focussed on the softs as the teams seek to understand how they will perform come Sunday.

Raikkonen asks his teams to check his brakes. The Finn is currently 17th.

Sainz is advised that the FIA has asked that the Spaniard stops using the old track as his escape road at Turn 13 when finding himself stuck behind a slower car.

"Look at this clown," says Kvyat of Latifi as the pair negotiate the twisty final sector.

Verstappen is setting a strong pace on his race sim, closely matching that of the Mercedes pair.

Bottas has completed the most laps (29), ahead of Latifi, Raikkonen, Giovinazzi and Ocon, all on 28, and Hamilton and Gasly (27).

With 15 minutes remaining there is still a mix of all three compounds in use, with all 20 drivers on track.

"It's like driving on ice," reports Russell, the Briton claiming that he's struggling front and rear.

Bottas, clearly lacking grip, runs wide and on rejoining dumps a whole load of stones on the track.

"Loss of power," reports Grosjean as his visibly Haas slows, though he is able to coast back to the pits.

The expletives fly when Gasly is told to back-up by 2s and that Kvyat has been told the same. "But he didn't," says the Frenchman, with a few extra naughty words thrown in.