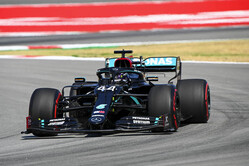 Ahead of today's practice session the air temperature is 30 degrees C, while the track temperature is 44 degrees. Yesterday was hot, and it is expected to get hotter.

While - surprise, surprise - Mercedes set the pace in both of yesterday's sessions - Bottas in FP1 and Hamilton in FP2 - on the race sims Verstappen was looking very, very good.

However, as so perfectly demonstrated seven days ago, there are no points on Saturday only on race day.

On a day in which most drivers struggled, the big surprise was Grosjean who was a very impressive fifth. Teammate Magnussen didn't get to do a low fuel run so we do not know whether this was a fluke or a step forward for Haas.

That said, with the Ferrari power unit in the back and no car upgrades one struggles to think where the American team might be gaining, particularly in light of its form thus far this season.

In all honesty, even Grosjean was at a loss to explain the improvement.

Also looking good was Ricciardo, who followed up on his impressive qualifying performance at Silverstone with fourth in yesterday's second session.

Back in the Racing Point following his fortnight in quarantine, Perez showed no signs of after effects as he posted the eighth best time of the day.

The lights go green and following a brief wait Grosjean gets proceedings underway. He is followed by Sainz and Magnussen. The McLaren driver on hards and the Haas pair on mediums.

Having completed an install lap all three head back to the pits as Norris heads out.

Fact is, the temperatures are going to increase dramatically in time for qualifying - and tomorrow's race - so there is little that can be learned at this exact moment in time.

As Norris continues, the Alfa pair head out, seemingly no Haas-style resurgence for them this weekend.

Russell, Ocon, Kvyat and the Ferrari pair head out as we finally get some action. A fair mixture of all three compounds.

Sainz, who complained of cooling issues yesterday, goes quickest with a 19.446, ahead of Raikkonen, Norris, Ocon, Vettel and Russell.

Twenty-three minutes in and the Black Arrows head out, Gasly and the Bulls the only 'no shows'.

Bottas (softs) posts 17.971, with Hamilton posting 18.324 moments later after having to back off due to traffic in the final sector.

As Gasly heads out, the Bulls wait, almost obstinately in their respective garages.

At which point Verstappen heads out, the Dutchman's car sporting a new set of softs.

As Verstappen begins his flying lap, teammate Albon heads out... on mediums.

Hamilton goes quickest in S1 before backing off in the second sector. Nonetheless he crosses the line at 18.077.

Hamilton is told he needs to find time at the entry to Turns 4 and 7.

After 35 minutes, the highest placed medium runner is fourth placed Leclerc who is 0.979s off the pace.

PBs in the first two sectors for Verstappen, the Dutchman eventually crossing the line at 18.160 having gone purple in S3. He goes from being 0.516s off the pace to just 0.189s.

Currently 14th, Norris goes quickest in the first sector, despite a major wobble in the final chicane, finally stopping the clock at 18.858 to go fourth.

Sainz goes second with an 18.046 as the qualifying sims get underway.

Vettel improves to fifth with an 18.707, while Leclerc posts 18.193. The Monegasque is only one place ahead of his teammate but around 0.5s quicker.

"He complains about people blocking him all the time," says Latifi of Verstappen, "but he's not any better."

Bottas consolidates his top spot with a 17.373.

All eyes on Hamilton who posts a PB in S1 as Verstappen heads out. The world champion goes purple in S2, finally crossing the line at 17.222 to go quickest by 0.151s. He could have been quicker but he lost time in the final chicane.

Bottas is told to "use the shade from the grandstand" in a bid to save his tyres.

It's back to reality for Grosjean, the Frenchman is currently 13th and his teammate 16th.

Verstappen reports that such is the slow pace of his cool-down laps that he's not harvesting enough energy.

Ocon's lap is wrecked by traffic, the Frenchman experiencing a particularly hairy moment when he comes upon a car that has almost stopped on the racing line.

Like Sainz yesterday, Verstappen uses the old track at Turn 13 to get around a couple of slower cars.

A nasty snap for Kvyat in the final sector, the Russian doing well to hold it together.

The session is red-flagged when Ocon crashes at Turn 3.

Replay shows Magnussen overtaking the Renault then slowing and moving to the centre of the track. As Ocon, seemingly distracted, closes on the rapidly slowing Haas he loses the car and hits the inside wall, damaging the front of the car.

"Ah, Magnussen braked," says Ocon over the radio. Asked what actually happened, the Frenchman replies: "I let past Magnussen because he was on a timed lap and he decelerated."

The session will not re-start.

The Ocon/Magnussen incident is being looked at by the stewards.