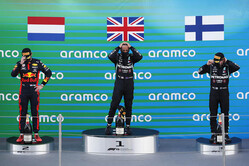 Lewis, your beloved number 44 Mercedes has just taken you to your 88th victory, increasing your championship lead. How was it for you?
Lewis Hamilton: I was just in a daze out there, I was just in a different... It felt really good. A fantastic effort from the team. Oh God, it felt really good out there today. It was a real surprise because we had this problem with the tyres. Management was very, very good and ultimately our understanding of what happened last week that we brought into this weekend has inevitably enabled us to do what we did today. I didn't even know it was the last lap at the end. That's how zoned in I was. I was ready to keep going.

If you felt in a daze, your rivals must have felt punch drunk. You controlled the race beautifully. You had everything under control, even your own strategy, choosing your tyres for the last stint.
LH: Yeah, it's something I study very hard before the race, understanding what tyres we are going to be using and what strategy we are going to do. And as I came to understand that I could make the tyres longer than we had planned I was even potentially going for a one-stop. But I think the strategy we had was just right. There was no need to take the risk of going on the soft tyre so I had a fresh, brand new medium tyres, which I think was best. I just want to say a big, big thanks to all the guys back at the factory at this really difficult time... for everyone in the world to just continue on, keep pushing, people staying safe. I hope everyone at home is staying safe. We have to keep wearing these masks and not only protecting ourselves but other people.

Max, what can we say? You split the Mercedes-Benz [cars], are you satisfied with that? Was it the best you could achieve today?
Max Verstappen: Yeah, I think to be able to split them today was very good for us. We clearly didn't have the pace like Lewis, very happy with second. The start was crucial, getting past Valtteri, and from then it was always just trying to do my pace.

When Valtteri came out at the end on fresh tyres towards the end there, were you expecting a bit more trouble than you got?
MV: Yeah, I mean I expected a little bit more but quite quickly, almost into that that stint I was quite happy with my tyres and he was not really catching and I felt quite comfortable.

Have you got any updates coming, any toys coming where you can really take the fight to these guys?
MV: Well, we keep trying to improve but of course the other ones, they keep pushing. We'll see.

Valtteri, your 50th Formula 1 podium, you got the fastest lap of the race at the end, I'll leave you to tell us how it feels.
Valtteri Bottas: Yeah, I think the start was the key point. The start was not good enough and I lost the position. So in the first stint I had to push hard to make some ground and then you struggle with the tyre life and in stint two I was pretty much behind Max and everybody knows how difficult it is to overtake at this track, so in the end I think the start was the bad thing.

And then it got pretty 'fighty'. It was tense down into Turn 1.
VB: Yeah. It's always... Last year it was also pretty tight. It just didn't really work for me I was kind of sandwiched. Yeah, disappointed.

Lewis, many congratulations, that's as dominant a victory as we've seen from you. Any concerns at all?
LH: There was one moment. There was someone's wing was on the exit of Turn 2. It was right by my right front tyre would normally go. It was a big flap. And luckily, in a split second, I managed to put it underneath the car, so my wheels either side. But other than that, no. It was a great, incredible effort from the team, which I'm so thankful for, and a real shock I think probably for us. We were not expecting tyre performance to be as it was today. On my side I had planned to manage the tyres as I did but sometimes you do and you go with that plan and it doesn't work out the way you planned. Sometimes you have more deg than you thought, but I had much better deg today than I had through P1 and P2 and I think that's what ultimately today made the difference. I think really the strategy that I took... Obviously we had a good start, but balancing myself, the gap between max and I, just trying to gauge where they were, because we didn't know how far they could go and how much wear they would have compared to us. Obviously in the last race it was much, much better. But the team did a great job in understanding, analysing - we had a great debrief coming into this weekend and I'm just so proud of everyone and today I was fully in the zone.

What does it say about your team to have turned around the tyre dramas of Silverstone so quickly?
LH: We've got some incredibly intelligent people in our team. You have to say a great job was done, but also it was a harder compound this weekend and I mean... [to Valtteri] I can't say we changed a huge amount did we?

LH: It wasn't massive changes, but the more and more we understand about the tyres the more we are conscious of the directions we can go with the car. I still think if it was last week at the last race we would potentially still have the same problem, but don't quote me on that. There are definitely things we need to try and improve on the car moving forwards but the balance was really great today so obviously I can't complain. But we can't just rest on today and that's the great thing about this team. They never rest on our success. They continue to try to raise the bar and understand and just go from strength to strength.

Just finally, another record has fallen to you today. You've passed Michael Schumacher's all-time F1 podiums of 155. What does that mean to you?
LH: I don't really know what to say to those things. I think... yeah... it's just very strange. All of us drivers here grew up watching Michael and one day being here. What is happening right now is far beyond what I dreamed as a kid. I'm incredibly grateful for the opportunity that I'm given every day. I think Michael was obviously an incredible athlete and driver, and so I just always feel really humbled and honoured to be mentioned in the same light as a driver like him and Ayrton and Fangio. It's pretty cool. And I hope the Hamilton family are proud also.

Max, great start, second place. Just how much satisfaction to you get from the race you drove today?
MV: Yeah, it was alright. I mean, the start was OK and then I could get into the tow of Lewis, so I could get by Valtteri into Turn One. And from there on I tried to follow Lewis a bit. Of course, initially he was just managing tyres, so I tried to back out of it as well - but of course at one point Valtteri was back into P3, so you can't drop back too much. But yeah, then, as soon as Lewis started to push a bit more I just couldn't follow the same pace and he just drove off. So, from then onwards I tried to do my own pace, and I tried to do the fastest strategy we could do to stay out of Valtteri. That worked out quite well today, so I'm very happy with that. We split the two Mercedes cars again, so I don't think there is much more I can do at the moment.

Could you just explain a radio exchange you had with your engineer: 'let's focus on ourselves and not Lewis'?
MV: Yeah, because at the end of the day, you can't control what they're doing and the only thing you can control is what we do. So we just have to make sure we do the fastest strategy possible for us.

Valtteri, coming to you, a frustrating day at the office, and your race was compromised from the off. Just talk us through the start. How slippy was it on the inside there?
VB: I don't really know if there's much difference between left and right. I don't know the facts. All I know is that I had a bad start, at least compared to Lewis and when you're at the front, the effect is even worse because the cars behind, they get a tow out of you. So, first I tried to move to the left, to get a tow from Lewis but then Max was already there, and then I tried to go to the right to cover the inside, but one of the Racing Points was already there. Then I had cars on the outside and one of the inside that was ahead of me into Turn One. So I was a bit sandwiched. Everyone knows on this track how tricky it is when you lose two places at the start. Of course we tried everything we could. The pace was strong and, as Lewis said, I think the tyres were holding on a bit better than expected. We tried something different at the end for me and even made an extra stop at the end for the fastest lap, which worked - but for me personally, of course, really, really disappointing today.