Perez not talking to other teams 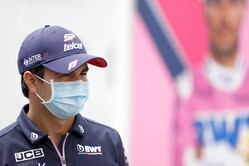 Despite continued speculation linking Sebastian Vettel to his seat, Sergio Perez says he is not talking to other teams about 2021, and is confident that he is remaining at Racing Point.

While the Mexican has a contract for 2021 and 2022, ever since Ferrari announced that it was not retaining the four-time world champion next season, the media has continued to link Vettel with the seat alongside Lance Stroll.

Despite the insistence of team boss, Otmar Szafnauer, the situation wasn't helped by a well-documented elbow-bump involving the German and team owner Lawrence Stroll at Silverstone or the subsequent revelation that Vettel had enjoyed a car share with Szafnauer.

Speaking ahead of this weekend's Belgian Grand Prix, two years after Stroll came to the rescue of Force India, Perez says he is confident of staying put and hasn't talked to rival teams.

"As I've said before, a number of times, what I said in Spain that I felt really, really happy in the team, I really believe in the project," said the Mexican.

"I've been here for a while," he continued. "And I've seen how the team is going upwards. We all feel internally that everything is working well. So we don't see the reason why we should change anything. I don't see any reason to change.

"We're enjoying a great season on track and things are working really well in the team. I don't expect any change."

Admitting that there are still ongoing discussions with the team, he added: "All the feedback that I get it's really positive. So I stay with that. That's where my confidence comes from, and as I said before, it's out of my hands so I don't even bother at all.

"I focus on racing, enjoy it and then whatever happens it's out of my hands. I don't even pay attention to it."