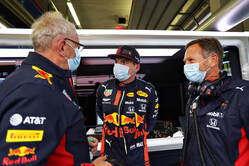 Red Bull's Helmut Marko believes that Max Verstappen can still win the 2020 title, confident that "at some point the Mercedes winning streak must end".

But for the electrical issue in the season opener, which sidelined him after just 11 laps, the Dutch youngster has finished on the podium in every race, and is currently runner-up to Lewis Hamilton, albeit 37 points adrift of the Briton.

Nonetheless, Marko insists the 22-year-old can still win the title.

"Verstappen can still become world champion, that's our goal for the season," he told Speedweek.

However, the Austrian admits that his driver's cause wasn't helped in Spain when the team went the wrong way in terms of set-up.

"We were there on Friday with very good long runs... on Mercedes' level," he said. "But in the race both tyre types overheated on the rear axle, so we had to reduce our speed.

"It was even worse for Albon," he added, "because we had gone the wrong way in his setup as well."

Indeed, Marko was particularly frustrated by Albon's engineer, Simon Rennie who made his return to the 'front office' role in Barcelona.

"The performance in Barcelona, including the strategy, is on the head of his race engineer," said Marko, referring to the fact that after pitting the youngster was put back out in traffic. "Alex looked stupid, but it was not because of his fault."

Though he battled back to claim 8th, Albon needs to improve his single-lap pace, as it is his relatively poor qualifying performances that are causing him problems on race day.

Nonetheless, despite speculation from some sections of the media, Marko insists the youngster's seat is safe.

"It was his worst race, but as long as he keeps going forward he is out of that discussion," he said.

The Austrian believes that the forthcoming ban on engine modes - now scheduled for Monza - will benefit his team.

"We still have certain disadvantages due to our chassis, which is somewhat unpredictable because data from the wind tunnel is not reflected on the track," he said. "But we're working hard on that. We're bringing new parts to Belgium again, which should help to improve stability.

"We're not even at the halfway point of the season now. And at some point the Mercedes winning streak must end."