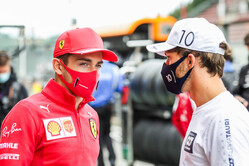 Scuderia Ferrari expected a difficult Saturday at the 65th Belgian Grand Prix and so it was. Having struggled all weekend to get the tyres of their SF1000 into the right operating window, Charles Leclerc and Sebastian Vettel failed to make the cut out of Q2 and will therefore start from the seventh row of the grid tomorrow when the five lights go out above the Spa-Francorchamps start line.

Both drivers started qualifying on the Soft tyres: Charles did a 1:44.228 on his first run, while Seb did a 1:44.554. Neither driver was safe to make the cut and so the team sent them both out again on another set of new Softs. Leclerc was first on the road with no one to slipstream and managed to get down to 1:43.656. Vettel benefited from tucking in behind other cars to set a 1:43.567, good enough for both to get through to Q2.

Charles and Seb have a free choice of tyre for the start of the race tomorrow and that opens up various strategy options when compared to most of their competitors. The weather could also play its part given that rain is expected at some point during the race in the Ardennes.

Charles Leclerc: "I think my final was ok and that P13 and P14 was the best we could do today. We managed to improve the car balance since yesterday, but unfortunately we didn't find the performance we were hoping for there.

"The race will be tough but I'm always optimistic. Hopefully, with a strong start, the right strategy, and good tyre management, we will be able to fight for some points.
These are tough times for all of us, including everyone who is supporting us watching from home, and I will give my all to bring home the best possible result tomorrow for them. It's important for everyone in our team to keep their heads up and stay motivated. Together we will work hard to find the cause of the issue we are having and address it."

Sebastian Vettel: "We need to stay strong and keep doing what we are doing as we knew this would be a tough weekend for us. We lose quite a bit on the straights and this circuit has a lot of straights. We are also struggling to get the tyres working properly. However the race is long so you never know what might happen.

"In the end I think today's result reflects our real level on a track like this. We are ready to do battle tomorrow, I don't think the rain can change a lot but for sure we will be trying anything, also on strategy, to bring home some points."

Laurent Mekies Sporting Director: "A very difficult qualifying with neither driver making it to Q3. This follows on from an even more difficult Friday, when we never managed to get the tyres to work properly. With very little grip, Charles, Sebastian and the team did what they could, turning the setup on its head to try and at least to get back to the performance level we had seen in previous races.

"Thanks to a lot of hard work from everyone, today was better than yesterday, but it was not enough to fight with our usual competitors. We also went for an aero setup aimed at tomorrow's race, when the rain could be a factor.

"Tomorrow we will do all we can and then work on finding out why we never managed to get our package working properly, right from the first free practice session."