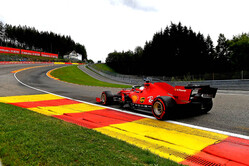 Scuderia Ferrari did not enjoy the best of Fridays at the Belgian Grand Prix. The team struggled to get the tyres to work properly with both Charles Leclerc and Sebastian Vettel's cars and so the performance of the two SF1000s was considerably worse than expected, even if the team knew before taking to the track that Spa-Francorchamps would not be an easy track this year.

In the 90 minute morning session, the team focussed on fine tuning the car working with the Hard tyres. Then, both drivers switched to the Soft tyre with which they set their best times: Charles stopped the clocks in 1:45.759, while Sebastian did a 1:46.179, good enough for 14th and 15th respectively on the time sheet. They completed 33 laps between them.

The afternoon session started on time, but with a damp track following a light shower, everyone stayed in the garages for the first 15 minutes. It did not delay the programme much and once the track had dried, Seb and Charles headed out to continue fine tuning the cars and evaluating tyres. This time, they opted for the Medium compound with Charles being quicker than Seb, the former doing a 1:46.030 and the latter 1:46.360. With 40 minutes remaining, they switched to the Softs to simulate qualifying but once again, they did not produce the desired results, with the SF1000 lacking grip on this compound. Charles did a 1:45.440, while Sebastian lapped around two and a half tenths slower in 1:45.683, only good enough for 15th and 17th places respectively. In the second session they completed 40 laps between them.

There is now plenty of data that will be analysed tonight to try and work out what did not work the way it should have done. Solutions arrived at by the engineers will then be tested in the third free practice session tomorrow at 12 CET. Then qualifying is next at 15, when it will be vital not to make the slightest mistake in order to get the best grid position possible. The Belgian Grand Prix starts on Sunday at 15.10.

Charles Leclerc: "It was a very difficult day. We are really struggling with the balance of the car. We tried quite a few things in the second session, including something quite aggressive in terms of downforce level but it didn't quite work out.

"It's probably a surprise to be so far back, but we are just lacking pace at the moment and have to work hard to catch up. But I'm not expecting any miracles this weekend. Our job as drivers is to give our best and that's what I am trying to do. It has happened before that we have been struggling on Friday and then come up with a solution on Saturday, so I hope this will be the case tomorrow."

Sebastian Vettel: "It was a difficult day for us. The car was tricky and difficult to drive and we are not quite where we should be as we struggled with the balance. We are looking to find options for the set up and we tried something different.

"I am sure tomorrow will be a bit better, but we don't yet know what the weather will be like. We had a glimpse of wet conditions this year in Austria therefore we are aware it won't be the easiest thing to deal with, but it always provides a chance to mix things up, so let's wait and see what happens."