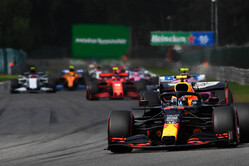 What a difference a year makes.

Twelve months ago, Ferrari headed to Monza feeling mighty pleased with itself and very confident of a home win. And why not?

Having dominated the Belgian Grand Prix weekend, the Maranello outfit headed into its home race quietly confident that not only did it have the legs of the Mercedes but that the team might celebrate its first Monza 1-2 since 2004.

Though Sebastian Vettel blew his chances early in the race, Charles Leclerc did indeed give the tifosi something to celebrate, while the German subsequently made up for things in Singapore.

At which point the technical directives began to be issued and suddenly Ferrari's power advantage was no more.

Whatever the whys and wherefores of 'flow-gate', the fact is that Ferrari's revival was at an end, and as Max Verstappen openly accused the Italian team of cheating further controversy was to follow.

While the FIA launched an investigation of the Ferrari power unit, the sport's governing body and the Italian manufacturer agreed a controversial deal that meant the findings of the investigation would not be made public.

Though there were threats of legal action and all the usual huffing and puffing and posturing, the arrival of the pandemic pushed the row to the sidelines.

While we may not ever learn the truth, the fact is that from the outset this year Ferrari has lacked power, and never was the contrast more obvious than this weekend at Spa, scene of last year's emphatic victory.

A year on, and Red Bull boss, Christian Horner is still smarting from the whole sorry affair, not least over the prize money he feels his team was cheated out of by a team using an 'illegal' engine.

"The whole thing has left quite a sour taste," admitted the Briton, when asked if he found the situation frustrating. "I mean, obviously you can draw your own conclusions from Ferrari's current performance but, yeah, there are races that we should have won last year arguably if they had run with an engine that seems to be quite different to what performance that they had last year."

Looking at the team's current situation, he admitted: "It's obviously very tough for them, but I think their focus has obviously been in the wrong areas in previous years, which is why they're obviously struggling a little with whatever was in that agreement.

"You've got Mercedes as a clear leader, then I think Honda and Renault are reasonably close depending on circuits and conditions. And then you've got Ferrari obviously at the back of the queue."

Finishing 13th and 14th on Sunday, Ferrari now heads to Monza and then on to Mugello, the Tuscany track it owns and where it will 'celebrate' its 1,000th Formula One World Championship start.