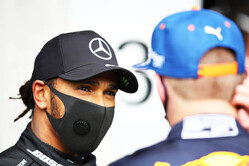 Asked at race end if he found his afternoon "tantalisingly frustrating" or whether he was satisfied, Max Verstappen was in no doubt.

"It was pretty boring, to be honest," said the Dutchman. "Not really interesting; not much to do.

"I couldn't really keep up with them when they were pushing," he continued, "and from my side I ran out of tyres at the end. The last eight laps I was just backing it out, saving the front tyres. It was not really enjoyable out there today.

"On the medium I didn't really have a lot of grip and on the hard tyre, initially I was trying to put a bit of pressure on Valtteri, but then they told him to speed up and I couldn't keep up. Yeah, a bit lonely."

Other than some intriguing battles in the midfield, it was business as usual, the first three finishers being the first three men on the grid, the podium essentially decided at the first corner. Again.

As he enjoys a 47 point lead, having won 5 of the 7 races thus far, setting new records on an almost weekly basis, when asked if his - and his team's - domination of the sport is "off-putting", Lewis Hamilton pointed to the rules.

"I can't speak for the fans but having been a fan, growing up, having lived in different eras watching the Schumacher era of course, I know what it's like," he said.

"As soon as the start was done and the restart, you generally know that I don't make too many mistakes so you kind of... and the same with these drivers, you know, they're very, very consistent.

"It's very difficult to overtake in this circuit so I can imagine, it's definitely not the most exciting. I feel exactly the same as Max; it wasn't the most exciting... I mean, I generally really enjoy myself in the car because it's... if you don't enjoy the moment, what's the point in doing in it?

"I'm still enjoying the battle," he insisted. "Every time I come through turn 15, I look in my mirror, I see where Valtteri is, whether he's closer or further behind, taking in the knowledge of what times he's doing, the gaps between him and Max and really trying to get the perfect balance each and every single lap.

"That's still a massive challenge for me. It's just perhaps not as fun for people to watch but when you're in it; it's a little bit different.

"Of course, I would love to have a real race," he admitted. "I've definitely had races in the past here which are a little bit closer, trying to follow the Ferrari and stay on top of them but they could overtake because they had all that extra power.

"I hope the next races, we have the... I think the Red Bulls have improved. I really hope that we have more of a race because I think everyone wants to see us all battling together."

Asked what he thought of Schumacher's dominance of the port in the early 2000s, he said: "I can't remember. I was a teenage kid, I would have woken up, had my bacon sarnie and probably watched the start and gone to sleep and then woke up to watch the end.

"If I was watching today I would do the same most likely and watch the highlights because it's much shorter, unless a friend told me there was a super exciting race on TV so that you watch the whole thing.

"Ultimately, this is not what fans... and I hope that people need to hopefully understand that this isn't our fault. At the end of the day we're drivers, we've come through all the ranks, we've earned the positions that we have and we come in weekend in, weekend out, devoted and give absolutely everything to go out there and perform at our best.

"Ultimately the decision makers who design the cars, who set rules and those kind of things, are the ones that you could apply pressure to to ultimately do a better job moving forwards, if that's possible.

"I'm hopeful that's what they're going to do in 2022 and with that new car, maybe we'll see a different form of racing where you can follow. Wouldn't that be something if we can follow closer and have more close races?"

Indeed it would Lewis. But in all honesty, we've been here before.

Indeed, the only thing we do know for certain about 2022 is that Lewis won’t be eating bacon sarnies.