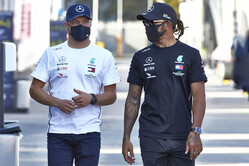 Despite agreement on the new Concorde, it would appear that the sport is the same, seething hot bed of intrigue, self-interest and back-stabbing it has always been.

Still relying on its confidential agreement with the FIA over its 2019 engine, Ferrari demands openness and clarity on copying if it is to drop its duct-gate appeal.

Never one to be left out, Christian Horner has opted to add his two cents, the Briton claiming that it is "obvious" that - shock, horror - Mercedes favours six-time world champion over his Finnish teammate, Valtteri Bottas.

"It's obvious that Mercedes favours Lewis," Horner told reporters. "You see it on strategy, the positioning of the cars and so on.

"Why wouldn't they have put Bottas on a two-stop, for example, in Spa?" he continued. "That would have given him the opportunity to win the race.

"The problem is that everything is geared towards Lewis this year on his record-equalling campaign. The reality for Valtteri is that unless he qualifies ahead, he hasn't got a chance."

Horner's claim comes days after the Finn insisted that he still has a shot at the title, despite the fact that he has now slipped to third in the standings, 50 points adrift of his teammate.

While Max Verstappen is 47 points adrift of Hamilton, Horner refuses to give up the idea of challenging for the title, albeit adopting Wolff's default underdog stance.

"We are still very much the outsiders," he said. "Hamilton and Mercedes have been the favourites for both titles, as they were coming into this season, but there is still a long way to go as we aren't even at the halfway point yet.

"We never give up and we treat every race like a cup final and we are in a position whereby we have nothing to lose."