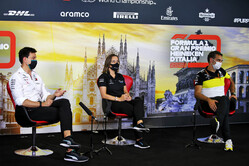 Q: Claire, if we could start with you. It was a big announcement from you yesterday. The Formula 1 paddock agrees that it won't be the same without your or your family in it. How much will you miss Formula 1?
Claire Williams: Firstly, I would like to say an enormous thank you for all the support that we have received since making the announcement and I think we felt quite overwhelmed by it. Williams has obviously contributed a huge amount to Formula 1. Certainly I think the legacy that Frank and Patrick have left behind is nothing short of extraordinary, what they have achieved. Not just the support we have received in the paddock, which we're enormously grateful for, but also the support we have received from our fans. We have some of the best fans out there and yesterday they were contacting us in their thousands and it was lovely to see and we thank them enormously for all of their support.

Q: How much will you miss Formula 1?
CW: I think you can probably imaging how much I will miss Formula 1 and how much the family will miss Formula 1. We have been in this sport for more than four decades and we have given it our all. I think we have all felt enormously privileged for the fact that we have had the time we have had in this sport, that we haver even been in this sport. I know certainly from my perspective, I've always felt incredibly lucky that I was born into the Williams family, that I have grown up in this magical world that we all get to live in and work in every day; that I got to grow up around Williams and the incredible people that we have had there past and present. I will miss the people the most. It's quite emotional for us. This has been our life for so many years. It's what has defined us and it is who we are. But this is the start of a new chapter, not just for Williams but for our family as well.

Q: Thank you Claire. Toto, if I could come to you next please. You've had many dealings with Frank and Claire over the years and could we just get your reaction the news that the family is leaving Formula 1?
Toto Wolff: The family have been the founders of this team and I will always hold the team high up. It was the start of my own journey in Formula 1. I remember the first sentence that Frank Williams told me when I went there in 2009 and that was "somebody told me that you can help repay my mortgage". This is how he is and he is super straightforward and I ended up with a shareholding in the team. I met Claire and without it meaning it in any way patronising, I thought it was very important that Claire was on the board and I'm impressed on how she grew there and what she has achieved, together with her father. I will never forget our last win in 2012 with Pastor, which was an incredible moment, also because your mum was there, and probably one of my best moments in Formula 1.

Q: Cyril, Renault has a lot of heritage in the sport, much of it intertwined with Williams, so please can we get your thoughts on this?
Cyril Abiteboul: Obviously it's an emotional moment, because as you say, the legacy that the team is carrying today under the Renault name has had its greatest moment, also as an engine supplier, particularly as an engine supplier of Williams. They were instrumental to building Renault's reputation in the world - in the world of Formula 1 but also in the automotive world as a large OEM - so it's been great sporting moments but also great business moments. We have for instance the Clio Williams, that is still a very fancy car the people love. It has clearly been a milestone of the sport but also on the road. Myself, I fell personally in love with Formula 1 during this period. Myself, one of my best memories is when I announced in Viry that we had done an engine deal again with Williams. That win of Pastor was actually not with a Mercedes engine but with a Renault engine. That was an amazing moment also for us. It's good that the name I understand it staying but also a bit sad when the people that are carrying the name are leaving. But it's good that the name stays and that there is a way forward for the Williams name and also the factory and the group of people.

Q: (Dieter Rencken - Racing Lines) Toto, you said on the 9th of August you said: "obviously, our reputation is very important. If someone thinks we have done something wrong they should protest and we are happy to go to court." Since then variously people, team principals past and present etc have made potentially defamatory remarks about the team's involvement or possible involvement with Racing Point, some saying that you supplied data, wind tunnel models, full-sized cars. Have you taken any action or not?
TW: Of course when there are defamatory comments being put online or that are being taken on air we have reacted appropriately. I get really upset when unfounded rumours find their way into the press, especially when we are, I think, a very straightforward, very compliant organisation because obviously we represent one of the most iconic car brands in the world. But, you know, things are often being put out of context in the press, they are being tweaked, people are making up rumours, the sources are unreliable sometimes, but as long as it doesn't damage the reputation of Mercedes then you have to take it with a pinch of salt.

Q: (Luke Smith - Autosport) A question for Cyril: the Renault Group have announced that you will be heading up the Alpine brand moving forward. Can you explain what's going on there? Are we going to see a closer alliance between the Renault F1 operation and Alpine, even a renaming of the Renault F1 squad and just what the situation is?
CA: Thank you for the question. Obviously I need to be a bit more specific. What Renault has announced is really two things. First, as you know, we have a new CEO Luca De Meo come in with clearly a great vision for the group but in particular to move from value driven to a value driven organisation (sic), positioning clearly four brands at the heart of the system. One thing that he has announced is that he has big expectations indeed for Alpine and what he has asked me to do as a mission, on top of what I am currently doing, running the team, is to provide a couple of suggestions in order to build an organisation around that brand. Right now that brand is one car, one model - A110 - but we want do more and that needs an organisation: and engineering department, a product department, a sales and marketing and communication department. So that's what I'd like to do. That's what I've done for the team: building an infrastructure and a platform. That's what I will be doing on the top. But that has absolutely no implication on the marketing strategy. It will be up to him to decide what way he wants to market the different brands. I'm just running the team.

Q: (Scott Mitchell - The Race) Just to follow up on that. Given the Alpine brand's history would it not make sense for it to be absorbed as the sporting part of Renault as a company? And depending on the direction you want to go, is it effectively a decision on whether or not Renault Sport continues as a brand or Alpine takes over?
CA: I'm afraid I need to say these questions are not for me, these questions are corporate strategy questions for the CEO, so I can only say that as soon as you have access to him you can ask him. My two cents is that with the new Concorde Agreement we have finally the possibility to have a stable platform in Formula 1, a great marketing platform. Again, the way we want to make use of that platform will be up for the CEO. We have a flexible platform; we have different brands. Probably rationalisation will be one of the things we need to do given the group financial result. We need to optimise the way we do things. But first there is a strategy to define and it's not up to me to disclose.

Q: (Alan Baldwin - Reuters) Claire, you have been the only female team boss, or the only woman to run a team recently and you have given opportunities to female drivers such as Susie Wolff and Jamie Chadwick. I'm sorry to see you go and I just wondered if you feel that your departure is a setback for the aim of maybe one day getting a woman back into Formula 1 as a driver and also within the sport a role model. You are an important role model for many women.
CW: Thank you Alan, I appreciate that. We've done a huge amount of work at Williams in order to promote greater diversity across the board, with a particular focus on gender diversity. I feel that that work has been enormously successful but it will continue, whether I'm there or not. The teams we have in place at Williams now running those programmes are incredibly passionate about it and I know that they will continue that work. But I do think Formula 1 has changed over the last handful of years. I think that the world has changed and in response to that Formula 1 has become much more diverse. We see many more women working in our sport and I know that will continue. I know that my fellow team principals are now thinking about more women across the board and it's something that is on everybody's agenda. But I've always believed that this sport should be based on a meritocracy and I think only the best people work in this sport and that should continue to be the case. We do need more women coming in. As I've said, we have seen more women coming into Formula 1 over the past few years and I hope that work will continue and I absolutely believe that it will.