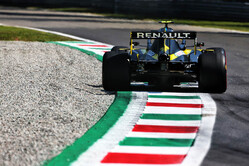 As Renault seeks to recover from the Carlos Ghosn scandal, new CEO, Luca de Meo has announced a major restructuring of the company.

Over the years the Alpine brand has been used sparingly, but moving forward Renault is looking to change that and Abiteboul, who leads the entire Renault Sport Racing division, has been charged with the "creation, organisation and implementation" of the Alpine brand.

Speaking at Monza today however, he insisted that this new role will not compromise his work with the Renault F1 team.

"Right now what I have been asked to do is a mission, with a set of proposals, in order to structure a brand," he said. "I've not been asked to run the brand. It is not in any way a permanent appointment whatsoever, that's what I will be focusing some of the spare time I have given what I am doing on Formula 1.

"There is no question of a change of team leadership for the time that I do this mission," he added.

Asked about media speculation that the F1 team might be renamed and undergo a livery change (again), the Frenchman said: "These are corporate strategy questions for the CEO. My two cents is that with the new Concorde Agreement we have finally the possibility to have a stable platform in Formula One, a great marketing platform. The way we want to make use of that platform will be up to the CEO.

"We have a flexible platform," he added, "we have different brands, probably rationalisation will be one of the things we will need to do given the group financial results.

"We need to optimise the way that we do things, but first there is a strategy to define and it's not up for me to disclose."