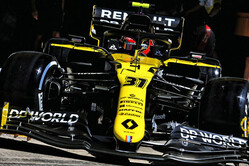 After six rounds of the 2020 season, Esteban Ocon has the unenviable statistic of being out-qualified by his teammate, Daniel Ricciardo, no less than five times, while the Australian's fourth in the British Grand Prix marks Renault's best result since its return to the grid as a constructor.

Thus far, Ocon hasn't come close to shoeing the form of late-2018, far less troubling his teammate in the same way that he troubled Sergio Perez at Foce India in 2017 and 2018.

At next week's Belgian Grand Prix, in a bid to rediscover his old form, the Frenchman will have a new engine, gearbox and various other components.

"I feel that Spa is going to be a fresh start," said the Frenchman, who has a miserable weekend in Barcelona, crashing in final practice and failing to make the cut in the second phase of qualifying, going on to finish 13th in the race.

"There is going to be a new gearbox for me, a new engine, a lot of new parts as well because we are not happy with the performance difference between the cars," he continued. "Hopefully that will make it closer, and hopefully it is going to be a fresh start for my side of the garage.

"We are honestly changing the engine for the straight-line speed that I was lacking," he admitted, the Frenchman only having out-qualified his teammate once so far, in the mixed conditions of the Styrian Grand Prix. "But there are also other areas where I feel - and we feel - we were not competitive enough compared to the other side of the garage.

"We are going to change the parts and see if it makes a difference or not. But only time will tell... in my mind I believe yes."