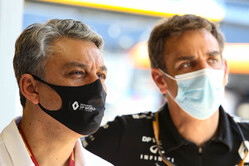 Renault boss, Cyril Abiteboul says that new company CEO Luca de Meo is going to be a "game changer" for the team.

In all honesty, the Italian couldn't have picked a worse weekend to visit his team in action. As Esteban Ocon speared into the barriers in final practice, as de Meo winced, while beside him Renault Sport boss, Jerome Stoll's eyes almost popped out of his head.

Next day saw the French outfit score its first point-less result of the season, with Abiteboul admitting "the car is not good enough at a track like this".

That said, a number of interesting moves by the French team, not least the return of Fernando Alonso and the recruitment of Pat Fry, appear to finally put to bed all notions of the manufacturer quitting the sport, its subsequent acceptance of the new Concorde Agreement giving further confirmation.

Asked how supportive de Meo is of the F1 project and whether he has set goals for the team, Abiteboul said: "No. He knows the goal of the team, he knows the team situation.

"He's here on the long run," he continued. "He fully appreciates what's being done, in measures, also what we are doing with the level of resources that we have - because I think he has a better understanding and knowledge of the sport, which is a good thing for all of us.

"But he also has clear expectations, not just for the racing team but also for the way the racing team will play a role in Renault's long term strategy - and I think that's what matters the most."

While there weren't any points for Renault, there was the now traditional post-race protest of the Racing Points.

Abiteboul was asked if the new CEO had played any part in the decision to press ahead with the protests, as they coincided with his arrival at the company, and also whether he had been influenced by others.

"In Luca de Meo we have a CEO that is really passionate and enthusiastic about cars, about the product, about sports cars and about motor racing," said Abiteboul.

"Clearly that's something that's going to be a game-changer for all of us in Renault. And also for myself.

"He's been a great person that I've been able to personally engage, and clearly I'm not going to hide or deny the fact that he's had other discussions with peers from the paddock or associated to the paddock.