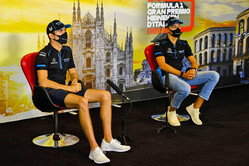 "It's a sad day for us," George Russell told reporters at Monza, shortly after the Grove outfit broke the news that this weekend's Italian Grand Prix will mark the end of the family's association with the eponymous team.

"For me personally, Frank and Claire gave me my opportunity in F1," he continued, "it's something I'm very thankful and grateful for, and obviously having the opportunity to drive for such an amazing and prestigious team for the two years I've been here so far.

"It's sad to see the Williams family step aside, but the history of Williams will remain and we will continue to fight and represent the family name."

"From my side I was definitely a bit shocked to hear the news this morning," added Latifi. "I think when the news broke that the team was sold, it was definitely something in the back in my mind that I could have anticipated but just wasn't expecting it so soon. Even the whole sale of the team in general happened much quicker than anyone thought

"I haven't yet done my first full season in F1 but I've been in the team environment and part of the Williams family since last year in my role in the team," he continued.

"It was very special that Claire and Frank gave me my first opportunity to cut my teeth in F1. I think it's always going to special that where I started out was with Williams.

"The culture and atmosphere that has been cultivated over the years here is going to remain the same because that's something that will not go just because Claire and the family are stepping aside. I'm just very grateful for them to have given me the opportunity."