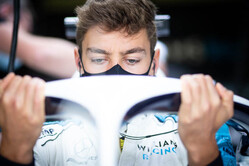 Williams driver, George Russell has paid tribute to the halo device following his clash with Antonio Giovinazzi's wheel during the Belgian Grand Prix.

While it was initially thought the pair had collided, it soon became clear that the Italian had lost his car as he was pushing to keep pace with Sebastian Vettel, and Russell was caught up in the aftermath, the Briton ploughing into the barriers on the other side of the track after hitting a wheel that had become detached from the Alfa Romeo.

"I saw Antonio hit the wall," said the Briton, "and had a second to decide whether to go left or right.

"As I saw him coming out of the wall and sort of staying slightly to the right, I committed to the left," he continued, "he got flicked over by one of his rear wheels and that launched across and hit my car.

"So I was doomed... if I went right, I'd have crashed into him, if I went left I'd hit his wheel.

"For a split second it was pretty scary seeing that massive rear tyre flying across the circuit with no idea where it was going to go," he admitted. "I'm thankful for the halo as I know with hindsight that even if that wheel was heading towards me I would have been safe. We're all very lucky to have that system."

However, the big question in the aftermath of the incident is how the wheel became detached in the first place, the halo having been introduced in the wake of a number of similar incidents, not least the death of Henry Surtees who perished after being hit by a wheel during an F2 race at Brands Hatch.

"The reality is obviously I was unfortunate that it hit my car today," said Russell, "but that could hit a marshal or someone in the crowd if they were there.

"That's the most important thing, year on year Formula 1 is taking massive steps on safety and from every incident you learn the limitations and obviously this is something that needs to be improved."