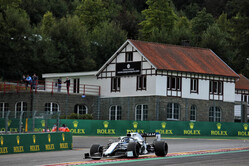 Nicholas Latifi finished 16th in today's Belgian Grand Prix. George Russell's race unfortunately ended in the barrier after being unable to avoid a lose wheel coming across the track from Giovinazzi's car which crashed just ahead.

George started the race 15th on the medium Pirelli tyre, with Nicholas lining up 19th on the same compound. Nicholas pitted twice, stopping on laps 11 and 30, firstly taking on new a set of the hard tyre and then switching back to the medium compound.

Dave Robson, Head of Vehicle Performance: We felt that we had made some progress with our race pace this weekend, but we didn't really get a chance to show it today. Both drivers started well and made places initially but were unable to hang on to them for the first lap. This put both out of position and ultimately meant that George was behind Giovinazzi when he crashed. George was forced to take evasive action but couldn't avoid the debris and ultimately the wall. Although very frustrating, we are relived that nobody was hurt in what could've been a nasty incident.

Following the safety car, we opted to switch Nicholas to a two-stop race and in the final stint he showed good pace despite not being fully happy with the behaviour of his car and was quickly able to catch the cars ahead. When Magnussen pitted, we were able to keep him behind and continue to close on Grosjean and Leclerc. Frustratingly, we caught them on the final lap but didn't get an opportunity to pass.

We learned a lot this weekend that will help us next week in Monza and we are keen to get the cars back on the track and continue to push the cars around us.

Nicholas Latifi: Straight from the formation lap and the start of the race I didn't have a good feeling with the car, there was quite an imbalance. The conditions were different compared to the previous days and it was a real challenge out there. I enjoyed the last stint pushing flat out on the edge, chasing Romain and the Ferraris. Overall, it was a very tough race today.

George Russell: It is frustrating, I was in the wrong place at the wrong time and there was nothing we could do. I went to the left to avoid Antonio's car and then his wheel came from nowhere and hit the front of my car which pushed me into the wall. It was quite a big impact, but I am ok. I feel very fortunate to have the halo on the car as it could have gone quite near my helmet. It was a very unfortunate set of circumstances, but that's just racing sometimes. Up until that point I was in a good rhythm. I had overtaken the Haas, but it would have been a long and difficult race out there for us.