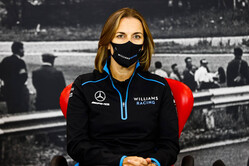 Claire, following the sale of the team to Dorilton Capital, what can you tell us about the new owners and the structure of the team going forward?
Claire Williams: First of all, I think it's important to say that we are delighted that we have managed to secure this outcome of the strategic review process. In this kind of financial environment, it's never easy to undertake these transactions but we are very happy at Williams that we have managed to secure new owners, but also owners that we know are hugely passionate about this sport and also about Williams. They have very clear ambitions for where they want to see this team and they are prepared to put that investment into the team in order to do that. For the moment, it's business as usual, nothing changes in the here and now, and we're looking forward to going racing this weekend.

And Claire, knowing how passionate you are about your team, how difficult has it been for you to sell these shares?
CW: I won't be lying if I said it hasn't been emotional over the past few months, but it has been a few months so we have all managed to get our heads around it and this can only be a good things for Williams. We have always in our family put this team first. It's always been at the heart of the Williams family. We've put our people first and we've put the success and the future of our team first in making any kind of decisions in what we do. So this was almost, I suppose, a no-brainer for us. The team needed the investment and the team now has a really bright future under its new owners. I think most importantly for the fans out there, you will still see the Williams name racing in Formula 1.

Thank you Claire. Fred, coming to you next. A frustrating morning for Antonio Giovinazzi. What can you tell us about his issues?
Frederic Vasseur: Ah, he had a water leak on the engine side. It's a shame because he was not able to do a single lap today. Let's see what happens with the weather also, because it's a big shame if he is not able to do some laps with slicks before the quali. But it is what it is.

Can I ask you about the new Concorde Agreement. How pleased are you with the new deal and what kind of opportunities does it present for a team like Alfa Romeo?
FV: I think it's not just for Alfa Romeo or for another team. It's good for Formula 1, it's a good step forward for the championship. The sustainability of the small teams it's probably also an important topic for the big teams. They have to avoid just being focused on themselves. At the end of the day we have to have a complete grid of 20 cars and we have to be sustainable. I think it is a good step forward in the right direction. I think that everybody would like to get a bit more here or there, but at the end of the day it's a good compromise.

We had Kimi in the press conference yesterday and he spoke about his future, saying that he has yet to decide whether he wants to continue in Formula 1. If he wants to continue, will you have him?
FV: I think the most important thing is the motivation, the motivation on the driver's side first, because I think it's difficult for Kimi to struggle with the pace when we are at the back. Now that we did a good weekend last weekend in Barcelona, the pace was much better. This morning was also much better and we have to continue to improve and to do small step by small step and to be back into the fight. This is the most important thing but not just for Kimi, but everybody in the team. The main motivation in a racing team is coming from the results and nothing else, from the drivers to the mechanics, to the engineers, to myself and we need to get results.

Are you impressed with the job Kimi has done for you this year?
FV: Yeah, yeah! Honestly, Kimi is far from being the biggest issue! He's doing a good job. We saw last week in Barcelona that the pace is there, this morning again - he is in front of the two Ferraris. It is a good reference for us. Let's see what happens tomorrow and Sunday and we have to continue to push and to get the last tenth on every single topic and I think that Kimi is pleased when we have this kind of motivation.

Franz, let's start with the Concorde Agreement if we could. It's the final part of the puzzle that's hoped to level the playing field in Formula 1. Are you confident that it's going to do that?
Franz Tost: Yes. I must say that we are really satisfied that the Concorde Agreement is signed now. Good job done by the teams and also the FOM and the FIA, because it was not so easy. It was long negotiations. We from the midfield teams, especially AlphaTauri, now are really happy that this Concorde Agreement is signed because the money distribution is much better nowadays than it was in the past and I think in combination with the cost cap and the much fairer money distribution the field will come much closer together, which should guarantee interesting races.

Thanks. Now a question about Yuki Tsunoda. Have you been impressed by what he is doing in Formula 2 this year and are we likely to see him in an AlphaTauri any time soon?
FT: I'm not only impressed with his driving in Formula 2, I was impressed with him last year in Formula 3 as well and the years before. He is a high-skilled driver and he has all the ingredients together to become a successful Formula 1 driver. For sure, he will test for us in Abu Dhabi at the young driver test. Whether he will drive for us next year or not, this is being decided by Red Bull and it depends also whether he gets a Superlicence. If he continues like now then he will be within the first three or four drivers in the Formula 2 championship and it shouldn't be a problem to receive the Superlicence and the rest then we will see.

(Christian Nimmervoll - Motorsport.com) Claire, Dorilton Capital made the transaction through an investment vehicle that is called BCE Ltd, that is coincidentally the initials of Bernard Charles Ecclestone. Can you just clarify if there is any connection or any link in this deal with Bernie, if he's involved in it in any way? And also, can you comment on if you're going to be team principal beyond this season?
CW: Yeah, I saw this. I spoke to Mr Ecclestone earlier in the week and I did ask him if it was him behind it. That's a joke, by the way. Bernie has nothing to do with our new ownership. Dorilton Capital is completely independent. Bernie is not the new owner of Williams and, as I said earlier to Tom, I am in my role, I'm here, I'm doing my job, I'm actually deputy team principal, not team principal. My father is team principal still and it is business as usual.

(Luke Smith - Autosport) Another question to Claire: I think it has been quite a momentous couple of weeks for Williams in terms of everything that's happened with the sale, with the Concorde Agreement, and also the clarification regarding car copying, which you said was the reason for withdrawing the appeal. How much brighter do things look for the team now, moving forward? How much more confident and excited are you about the team's future, even compared to, say, a month ago?
CW: Yeah, that was... the whole purpose behind this strategic review process was in order to secure this team's future. It has been an incredibly difficult few years for us for a number of reasons, both on track and off track. I think we have done an extraordinary job keeping the team going in what has been a very difficult financial environment for it and this is the dawn of a new era for our team. We have secured the investment that was the whole purpose of this strategic review process. We have great new owners who are willing to put the money in that's required in order to take this team forward and so couple that with the new Concorde Agreement that kicks off in 2021 I think Williams can really start to start moving further forward up the grid and making some good progress and that's all we want to see.

(Adam Cooper - Motorsport.com) Claire, in the sale announcement you said that Dorilton are 'people who understand the sport and what it takes to be successful. Can you expand please, on what sort of knowledge they have of Formula 1?
CW: As I said, the Williams family have always put this team first and we wanted to make sure that we would be able to find new owners for it that did understand this sport. I can't go into a whole lot of detail as to the people behind Dorilton. That will become clearer over the... we will be able to make that clearer over the coming weeks and months but they've done a huge amount of due diligence since the start of this process. They were in the process from the beginning, they have spent an awful lot of time behind the scenes going through everything that you would expect them to go through to understand our team but also to understand the sport. They have some very strong advisors as well, who have been helping them through this process to build their knowledge and of course there's still going to be a learning process for them but they are already within the team, they're working on Grove with our team there currently in order to understand what's required moving forward. So I have absolute confidence that they are the right people to take this team forward.