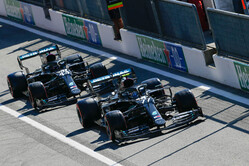 Lewis claimed his 94th pole position in Formula One - his sixth of the 2020 F1 season and seventh at the Italian Grand Prix. Valtteri was just 0.069s behind in P2, securing his first front row place at Monza.

Today's result is the 10th front row place for Lewis at the Italian GP, equalling Abu Dhabi and Canada as his most successful races in terms of front rows.

Both drivers will start the 2020 Italian Grand Prix on the Soft tyre.

Lewis Hamilton: It wasn't the easiest session because of how close it was out there, so it really demanded a clean lap and I got that on both of my Q3 attempts. I'm very happy with the laps I did and Valtteri was very, very close, pushing me hard. I made some big changes going into Qualifying, so I was a little bit nervous before the session, but it all worked out well. A fantastic performance from the team today, particularly with the engine rule change. Hats off to everyone back at the factories, they've kept their heads down and this result is proof of the incredible work they do. I'm proud to be part of that chain and I'm excited to see what tomorrow will bring. It's going to be a fun battle.

Valtteri Bottas: Of course, it's disappointing to miss out on pole, especially by such a small margin. My pace has been pretty good all weekend and it was really close out there, as I expected. It was tricky with the tow, as I chose to run first this weekend, so I didn't have any - except during Q2 where I did the fastest time. I was on my own in Q3, which wasn't a bad place to be because you have clean air in the corners but obviously you are not benefitting from the tow on the straights, and it's a difficult balance to find. Still, the laps were good and I'm looking forward to tomorrow. My race pace on Friday was matching Lewis and this track always provides opportunities, so it's up to me to take them. It's still all to play for.

Toto Wolff: I'm very happy with our performance today. Both Lewis and Valtteri did a brilliant job throughout Qualifying, but Lewis just had the edge in the end. It was an interesting session, with it being the first time that we qualified under the new Technical Directive restricting the engine modes. So, no party mode today, but the result showed that all the hard work at the factories has been paying off and puts us in a good position for tomorrow's race.

Andrew Shovlin: Great laps by both drivers to lock out the front row again. The day has been fairly straight-forward, we were getting the drivers used to the minimum time for out laps imposed by the FIA in the morning and made a few small tweaks to the car balance. We'd done a bit of analysis yesterday on the effects of towing and for us, we seemed to be losing as much in the corners as we were gaining on the straights. Based on that, we decided to try and find some clean air to run in, which has the added benefit of simplifying your Qualifying session. Our team has been very busy in Brixworth over the last two weeks preparing for the introduction of the single engine mode and they have done a good job of retaining competitive power in Qualifying. The race tomorrow should be a one-stop for all. From Friday, it seemed that Max was closest to us on long-run pace. He's a few places back to start, but we know he races very well so it probably won't take him long to get through. Needless to say both of our drivers want to win tomorrow and with such a long run to Turn 1, the start is going to be really important.