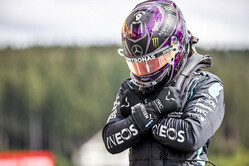 Lewis claimed his 93rd pole position in Formula One - his fifth of the 2020 F1 season and sixth at the Belgian Grand Prix. Valtteri will start tomorrow's race from P2, his first ever start from the front row in Spa.

Today's result marks the 14th pole position at the Belgian Grand Prix for Mercedes-Benz Power, equalling Ferrari as engine manufacturer for most poles at this race.

Both drivers will start the 2020 Belgian Grand Prix on the Medium tyres.

Lewis Hamilton: I feel incredibly blessed to be able to take pole on a day like this. I woke up this morning to the terrible news about Chadwick Boseman. What a humble man he was, portraying these iconic black figures. As a kid I wanted to be Superman, and it's so important today for young black people to have a superhero to look up to, who looks just like them. It's really not easy to perform at your best when you have something weighing on your heart, and to be truthful it was so difficult to shake off that negativity and channel it into something exceptional, but Chadwick showed that was possible. I've done a lot of laps in my F1 career, but those two laps in Q3 were almost perfect. You can't see my face under my helmet out there, but I was smiling, this track is just incredible and I was totally on the limit. We decided to go out early and run in the clean air as it's so easy to make a mess of the tow if you get blocked or there's a yellow flag and we definitely made the right call. We've got a big race still to come tomorrow and the Red Bulls looked good on the long-runs on Friday, but today it was an honour to be able to dedicate that pole to Chadwick because he inspired me. My prayers and thoughts are with his family.

Valtteri Bottas: I'm quite happy with Qualifying, my lap felt good today, especially the second run in Q3. I don't think I made any mistakes in that run, so I'm not sure where the delta to Lewis came from, I'll have to look at the data. But I'm actually not too bothered about missing pole, as starting second or third can be an advantage in Spa. We've seen it before that with a tow on the first lap you can overtake the leader going into Turn 5. I hope there's plenty of opportunity tomorrow to try and fight for a good result and I'm looking forward to an exciting race.

Toto Wolff: It's always good to qualify on the first row in Spa, which is a real drivers' circuit. We didn't really have a super smooth weekend so far; it was challenging to find the right set-up in Free Practice sessions, particularly in the low-speed corners. We still saw that pattern to a small degree in Qualifying, but much less so than before. I'm really interested to see how the race is going to pan out tomorrow, especially the first laps should be exciting. Riccardo has shown tremendous straight-line speed today, so he will be strong in the run up to Turn 5 tomorrow. Verstappen was very strong in the long runs yesterday, so I'm sure he will be in the fight as well. I'm looking forward to an exciting race - new game, new chance.

Andrew Shovlin: It was a bit closer at the front than it's been at the previous races this year. We're clearly running a bit more downforce than the Red Bull and losing a couple of tenths to them on both the long straights but we're quite a bit faster in the corners and ended up nicely ahead. Lewis put together a very good lap; Valtteri was struggling a bit in some of the braking zones and lost a bit of time there, but it's great that he's on the front row as well. The midfield is also very close behind which should make the race quite open. We expect the run to Turn 5 to be pretty exciting; it's difficult enough to hold the lead here but given that Max is a bit quicker and Daniel looks to have about 8kph on us, so it could get end up getting quite crowded towards the end of the straight. It's normally a fun race though and there's also a risk of rain to factor in.