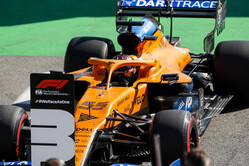 Carlos Sainz: "Very happy with P3! A great effort from everyone in the garage and a positive day for the whole team. We knew we had decent pace to fight in Q3, but to qualify P3 behind both Mercedes in such a tight session is a great feeling! Another good lap straight out of the garage in Q1 meant I could take two fresh sets of Soft tyres into Q3. I gave it all in my last attempt of qualifying and managed to pull off a very good lap to clinch this P3. I'm aware the job isn't done yet and the points are given out tomorrow. I hope we can have a clean race and that we can capitalise on today's result."

Lando Norris: "A tough quali, just because it's so tight between the midfield pack. The top two are gone, but between everyone else it was very tight and I made a few too many mistakes on my final push-lap, which cost me. There was nothing huge - it would've been half-a-tenth to a tenth - but that would've put me much higher up on the grid. Just a bit frustrated that such small things can cost so much, but that's just the way it is with the midfield being so tight at the moment."

Andreas Seidl, Team Principal: "P3 and P6 in qualifying at the 'temple of speed'. Congratulations to the entire team here at Monza and back home, to our colleagues at Renault, and especially our two drivers for putting in this great performance today. Impressive final lap by Carlos.

"After good pace on Friday with the low-downforce Monza package, we continued to deliver strong performance today in FP3, and carried this momentum forward into qualifying. Our MCL35 looked very competitive over one lap, and we were fighting right up there at the front of the midfield. The points, however, are distributed tomorrow, and we expect a very tight battle against the teams we're fighting in the Constructors' Championship. Heads down now. We will prepare as always and aim for good points tomorrow."