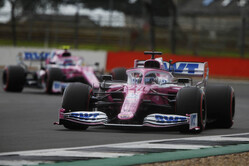 While there was no surprise when Renault and Ferrari chose to follow through with their appeal against the stewards ruling on the legality of the Racing Point RP20, there were raised eyebrows when McLaren and Williams - who had both notified the FIA of their intent to appeal - subsequently chose not to.

While some cited the fact that Toto Wolff retains a 5% stake in the Grove outfit, others wondered how such a move might affect the relationship between Mercedes and the Woking team, given that from next season McLaren will be using its engines.

Despite Andreas Seidl's insistence that pressing ahead with the appeal would not create "bad blood" between his team and Mercedes, the Woking outfit subsequently decided not to proceed.

Asked the reason for the U-Turn, Seidl insists that he has full confidence in the FIA which has promised to act to prevent F1 becoming - in the German's own words - a "copying championship".

"The most important thing for us was a clear commitment and agreement from the FIA and F1 that they want to prohibit extensive copying in the future," he continued. "We got this agreement with the announcement of Nikolas (Tombazis) last Friday in Silverstone and with further information we received on Tuesday.

"Based on that, we got everything which is important for us at McLaren for the existence of our team in the future, and for also making sure that we can be competitive in the future. That's what we wanted to get.

"Now it's important for us again to spend our energy on our own team, because as we have seen in Silverstone at the second race, we still have a lot of work to do. That's what I want to spend my energy on."