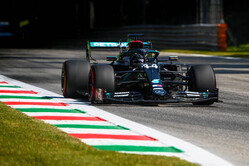 Ahead of today's all-important qualifying session, the air temperature is 28 degrees C, and the track temperature is 44.8 degrees. It remains warm, bright and sunny.

We say "all-important" because since 1995 the winner has started from pole on 15 occasions. And if you're not on pole, it certainly helps to be on the front row in order to be at the head of the queue as the field funnels into the first chicane.

Valtteri Bottas was quickest earlier today, as he was yesterday morning, however, it was the pace of the McLarens and Daniel Ricciardo's Renault that impressed.

Though the Australian suffered a late fuel pump issue which brought out the red flag, in Belgium last weekend, and again here at Monza the Renault has looked good.

The Racing Points also looked good, and while the AlphaTauris finished lower than expected, much of this can be put down to that late red flag which compromised everyone's running.

While Max Verstappen is as strong as ever, and Alex Albon finished just behind the Dutchman, Red Bull looks as if tomorrow will be spent fending off the likes of McLaren and Renault rather than hassling Mercedes.

You may remember - dear reader - that last year's qualifying session became a laughing stock as a number of drivers failed to post times in Q3 and they were preoccupied with delaying their final run until the last possible moment and then tripping over one another in the inevitable traffic jam.

Sadly, they don't appear to have learned, and even though the FIA is trying to clamp down on the silliness, we once again saw drivers bunching up and driving ridiculously slowly in FP3.

Indeed, we were lucky to avoid the accident that appears to be waiting to happen, when Lewis Hamilton had to take to the grass as he raced through the cars slowly heading into the Parabolica, one of the Haas drivers adding to the stupidity by actually overtaking. It comes as no surprise to see 8 drivers - including Hamilton - summoned by the stewards.

With the top 13 covered by just 0.864s earlier, it is understandable that drivers should want to seek out the 0.5 - 0.7s that a tow can offer, but there are surely better ways to go about it.

Another factor to bear in mind this afternoon is track limits. At times it has seemed that no sooner has a driver posted a time than it is deleted after straying wide at either Turn 5 or Turn 11. Fact is however, that while some drivers appear to keep on the black stuff others make a habit of going wide, Albon having his times deleted no less than 3 times earlier.

The lights go green and after a couple of minutes the Haas pair head out, followed by the other stragglers, Alfa Romeo, Williams and... Ferrari. All are on softs.

Leclerc is unhappy, feeling that he should have been sent out ahead of his teammate.

Vettel posts 21.151, but, courtesy of the tow, Leclerc crosses the line at 20.970. Moments later the Monegasque's time is deleted, as is Magnussen's.

The Mercedes pair head out on mediums as Russell goes third (21.587).

A 19.539 sees Hamilton go top, as Perez goers third, ahead of Sainz, Gasly, Norris and Stroll.

However, Gasly's time is deleted as Ricciardo goes 8th and Ocon 10th.

With 6:50 remaining, Stroll, Leclerc, Gasly and Magnussen have yet to post times.

Gasly goes 8th and Stroll 7th, as Vettel slips down to 17th.

Ahead of the final assault, Grosjean, Vettel, Giovinazzi, Russell and Latifi comprise the drop zone, with Albon, Raikkonen, Magnussen and Ocon hovering.

With 3:05 remaining, they begin to head out, including the pace-setting Mercedes pair.

Only Verstappen and the McLaren duo appear to have settled for their times.

Latifi is getting a tow from Hamilton.

As they enter the Parabolica, Raikkonen hits the brakes in order to avoid the silliness ahead. Vettel almost hits Russell. This is dumb, absolutely dumb.

As the rest squabble, Hamilton goes quickest in S2. The Briton posts 19.514.

Vettel pits, which means he misses the cut, while Leclerc goes 10th.

"What a mess," says Vettel, an understatement. "Why did the Alfa..." he stops short.

Meanwhile, the stewards, in their infinite wisdom, deem that "it is impossible to determine that any driver was wholly or predominantly to blame for the incident" in FP3.

At which point it is announced that the "incident" just witnessed has been "noted". That means Ocon, Latifi and Raikkonen.

And as Q2 gets underway, Bottas heads out, the Finn leading a train of fourteen cars. Having learned from Q1, Raikkonen bides his time.

The Mercedes pair are on softs, as is everyone else.

In clear air, this should suit Bottas, while teammate Hamilton is part of 'the train'.

At 3:37 they head out again... as one, with Ricciardo leading the way, ahead of Ocon, Bottas, Raikkonen, Hamilton and Verstappen. Everyone is on softs.

"This is going to get messy," Norris is told.

Ricciardo makes a mistake at Ascari, his lap is destroyed.

Bottas and Hamilton trade fastest sectors, as Ocon fails to improve on 12th.

Albon makes the cut by the skin of his teeth as Leclerc fails. "That's the best I can do," admits the Ferrari driver.

We lose Kvyat, Ocon, Leclerc, Raikkonen and Magnussen, the cause of that late yellow after the Dane ran wide in Turn 7.