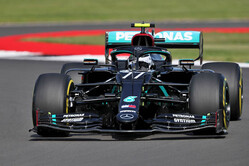 Other than being the first weekend since the engine mode ban was introduced, we also mark the end of the Williams family's association with the legendary eponymous Formula One team.

There is only one reserve driver on duty this morning, Roy Nissany replaces George Russell at Williams.

The lights go green and Vettel leads the way, followed by Norris and Grosjean.

Usually the Ferrari would be greeted by cheers, flags, red smoke and air horns, but "these are different times", as Lou once sang.

Bottas is among the early risers, with hards and mediums the current order of the day.

Most complete a single installation lap, a couple complete two, and as they return to the garages only Albon, Verstappen and Hamilton have yet to appear.

The track falls silent, and it is some time - try 15 minutes - before an engine bursts into life. It is the Honda in the back of Albon's Red Bull.

The cat-loving youngster completes a slow install lap before ramping it up as he appears to be set to post the first time of the weekend. Meanwhile, Raikkonen heads out in the Alfa.

The Red Bull stops the clock at 1:24.088, as more drivers head out, including Grosjean, Norris, Gasly and Ocon.

As Raikkonen crosses the line at 25.198, Albon's time is deleted for exceeding the limits in the Parabolica.

"Balance is pretty good," reports Albon, but tyres were cold. Indeed, the youngster posts 53.212 before that time is also deleted.

Next time around he goes quickest with a 22.280, ahead of Ocon, Norris, Grosjean and Gasly.

Hamilton and Verstappen head out.

As Stroll is told his tyre temps are on the low side, Bottas makes a mistake at the first chicane and takes a trip over the kerbs.

The Williams pair are the first to head out on softs as all 20 drivers are on track.

Magnussen is the latest to have his time deleted, the Dane joining a growing list.

Drivers continue to make mistakes at the first and second chicanes as they get used to the new track surface.

Shades of Q2 last year as a high-speed traffic jam forms on the back straight on the run to the Parabolica.

Bottas' time is deleted and as a result he slips to 7th, while Norris also has his time deleted.

Stroll complains about a very slow Mercedes on the racing line in the Lesmos.

Bottas goes top with a 21.657 as Verstappen goes off at Ascari. The youngster takes a bumpy ride through the gravel before giving the barriers a nudge.

As the session is red-flagged he makes his way back to the pits minus his front wing.

Reply shows the Red Bull driver losing it quite early in the chicane, going sideways and airborne as he heads across the final piece of track and then the gravel.

The session resumes, just in time for the drivers to hand back a set of tyres.

With 38:00 remaining an engine fires up, it's the Alfa Romeo of Raikkonen.

"It's getting quite dangerous how slow some people are going on the racing line," says Norris, "I think somebody needs to say something."

The Haas pair head out.

Raikkonen reports a "lot of stones" on the track following Verstappen's off.

While the Finn is on mediums, the other drivers heading out are switching to the softs.

"Where's the next car in front, I need to train for qualifying," asks Leclerc, clearly looking for a tow.

Albon goes third (21.500), ahead of Kvyat, Gasly and Perez as the drivers seek out those they can get a helpful tow from.

Grosjean however, has his time deleted, as does Vettel.

Leclerc has his time deleted as Grosjean demands, "am I going to get a tow on the next lap or not?" "Unlikely," comes the reply.

Interestingly, Kvyat's time - he's currently fourth - was posted on the mediums, as was Gasly's (sixth). Ricciardo and the Ferrari pair are also sticking with the yellow-banded rubber.

Verstappen heads out on softs, the youngster already expressing fears about Q2 and Q3 tomorrow as drivers seek tows.

As if proof were needed, Sainz is told to slow and allow Norris through. The Briton fluffed his previous lap and is now willing to assist his McLaren teammate with a tow.

Gasly has his time deleted, Turns 5 and 11 really causing problems for the drivers this morning.

With 16:00 remaining, the Black Arrows head out again, followed by Kvyat. However, the Mercedes drivers both head into the pits in order to perform practice starts.

Haas reports that Magnussen's car has a "cooling issue" and his session is at an end. This comes on top of last week's nightmare.

More and more drivers head out on used softs and mediums as they look ahead to the opening phase of Sunday's race.

While its not looking good for Leclerc, who is currently 11th, 1.2s off the pace, it is looking absolutely dreadful for Vettel who is 19th, 2.2s off the pace. That said, the German is yet to run the softs.

"This guy's blind," says Bottas of Nissany, as Norris and Albon have their latest times deleted.

Kvyat complains of "too much understeer in Lesmo".

As Leclerc has his time deleted and Bottas misses the first chicane, the cameras pick up on Gasly who is in the gravel at the second chicane following a spin. However, the Frenchman is able to extract himself and continue.