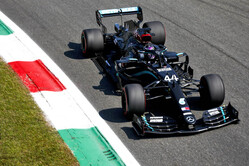 Ahead of today's second practice session, the air temperature is 26.9 degrees C, while the track temperature is 43.6 degrees. It remains bright and sunny.

Bottas set the pace earlier, ahead of Hamilton and Albon, though the Red Bull driver was almost 0.8s off the pace.

The session was briefly red-flagged when Verstappen went off and clouted the barrier at Ascari, but the Dutchman subsequently recovered to post the fifth best time.

The main talking point was the number of drivers who had times deleted for exceeding the track limits at either Turn 5 or 11, as the FIA continues its crackdown on the practice.

The other talking point was the continued practice of drivers bunching up, made worse here by the desire to get a tow. A number of drivers complained of rivals driving slowly on the racing line as the practice has all the hallmarks of an accident waiting to happen.

That said, in the moments before this session, race director, Michael Masi warned drivers about hindering one another and also ruled that there would be a set minimum time in order to determine if drivers are considered to be driving unnecessarily slowly on an out lap or any warm up lap during FP3 and qualifying, but not this session.

While it is far too early to start predicting a pecking order, Vettel finishing 19th on the timesheets was hardly promising.

Having handed his car over to Roy Nissany, George Russell will be back in the Williams this afternoon.

The lights go green but it is several minutes before a driver heads out, and when one does, it's Raikkonen. The Finn is followed by the Haas pair, all three on the mediums.

Raikkonen posts 22.959 and Magnussen 23.085 as Grosjean complains about the antics of Stroll who is driving very, very slowly on the racing line.

Looking strong this morning, the AlphaTauri pair head out.

"A bit too much understeer at low speed in 1 and 2," reports Magnussen.

Albon retakes the top spot with a 22.324, but is demoted when Gasly crosses the line at 22.034. Elsewhere, a moment at the second chicane for Raikkonen.

"Are there any cars around me, other than Alfa," asks Vettel, the German clearly seeking a tow.

16 minutes in and Verstappen and the Black Arrows have yet to appear.

All the running thus far is either on the mediums or hards.

His rear wing smothered in green flo-vis, Russell complains about the number of drivers running perilously slowly. There's going to be a shunt with this ****," he warns.

22 minutes in and Hamilton heads out as Verstappen posts a 22.040 to go fourth.

Elsewhere, Giovinazzi is the first driver to switch to the softs.

On his first flying lap, Hamilton (mediums) goes quickest, the Briton posting a 21.085.

At which point Bottas heads out on hards.

Albon and Verstappen running as one, as Red Bull rehearses for qualifying.

As Verstappen improves to third (21.584), Vettel runs wide at the second chicane.

Told that his time has been deleted, Leclerc asks to see a replay when he pits, refusing to believe that he ran wide.

The Finn subsequently improves to 20.932 on the hards, a tantalising 0.287s off Hamilton's medium pace.

Verstappen is third, ahead of Gasly, Ocon, Sainz, Stroll, Albon, Ricciardo and Giovinazzi.

Bottas is told that he's losing out in S3, while the first two sectors are good.

Following several minutes of inactivity, Sainz breaks the deadlock. The Spaniard heads out on softs as the qualifying sims get underway.

At the first split the Spaniard posts a PB, and again in S2. At the line it's 21.313 to go third, having made a minor mistake in Ascari.

Giovinazzi, Raikkonen, Grosjean, Russell and Latifi head out on the softs also.

Unfortunately Grosjean's time is deleted and the Haas driver slips back to 13th.

"A bit of a weird noise from the engine at the apex of T4," reports Russell.

Meanwhile, on the back straight there is a train of around 15 cars. Absolutely ludicrous.

Ricciardo goes second (20.905), but he appeared to go wide in the Parabolica.

Sure enough, Ricciardo's time is deleted, as Sainz runs wide in T6.

Vettel and Albon subsequently have their times deleted.

Norris has only completed 5 laps thus far, and has yet to appear on the softs.

As the qualifying sims come to an end, Hamilton is quickest, ahead of Bottas, Gasly, Verstappen, Sainz, Kvyat, Stroll, Leclerc, Perez and Ocon.

Raikkonen complains about the "old guy, standing there", who prevented him stopping at his garage.

Vettel is the first back on track as attention switches to the race sims. That said, the German subsequently pits. However, Norris finally heads out, on mediums.

Unhappy with his engine, complaining of an intermittent loss of power, Norris pits, as Hamilton and a whole load of others head out.

"Something touched my toes when I did the start," reports Hamilton.

Russell is unhappy with the balance of his car, complaining of some "weird bumps" from the Williams.

While most are on softs, Verstappen is on hards and Leclerc mediums.

And all the while, drivers are having their times deleted, the latest culprits being Albon and Grosjean.

"You're going to have to let Leclerc and Perez through," Verstappen is told. "I don't think so," he replies.

A spin for Vettel in the first of the Lesmos, the German appearing to have applied the power just a little too hard and a little too early. Ricciardo does well to avoid his former teammate.

"The car is so hard to drive," says Leclerc as he runs wide at exactly the same spot as his teammate spun just minutes earlier.

"Something is odd at the back of the car," reports Gasly before slowing significantly.

With 7:30 remaining, all bar Gasly are on track.

Norris (softs) goes third with a 21.089, the Briton completely out of synch with the other drivers as he focusses on his qualifying sim. And that appeared to be without the benefit of a tow.

Kvyat passes Leclerc and appears to leave the Ferrari for dead as the Maranello outfit continues to struggle.

As ever, Mercedes is on a different level, with McLaren and AlphaTauri looking likely to give Red Bull a run for its money.