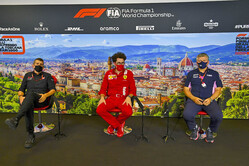 Otmar, perhaps we can start with you please. We're at Ferrari's 1000th race. What are your best memories of watching Ferrari as a Formula 1 fan?
Otmar Szafnauer: It's a good question. I had respect for Ferrari as a fan. The first time I ever saw them race was in the early eighties in Detroit when I was in university at the time and went down - I studied in Detroit so I went down to the grand prix and I remember the Ferraris battling with the, I think it was the Hondas at the time, and having worked for Ford Motor Company and General Motors I was at that time rooting a little bit more for Ferrari than Honda. So that was when it started. And then the Michael Schumacher years were absolutely incredible. They dominated and I remember those years too - but at that point I was more than a fan. I was working hard at British-American Racing to try to beat them.

Same question to you Guenther. Your best memories of watching Ferrari as a Formula 1 fan.
Guenther Steiner: I think it was when Lauda came back from his big accident in the seventies. I remember getting up at night, watching him when he made the comeback in Japan when I think he lost the championship there. Coming from the north of Italy, for sure everybody was rooting for Ferrari and Lauda being so successful. That's my memory of Ferrari. That sticks - and I think it's a great company. It does a lot for Formula 1, it has done over the time. They have over 1000 grands prix now, which you think is a number but it's a big number. So, yeah, it's part of it.

Coming to you Mattia. As Guenther says, it's a big number. It's a huge number. On a personal level for you, what does this milestone mean?
Mattia Binotto: On a personal level it's an honour. I think being here today with my current role, head of Scuderia Ferrari and team principal and somehow also greeting the 1000, I think it's certainly a responsibility but first of all it's an honour because it's a big history. It's so long since 1950, always been here, never stopped. I think being the very first one, the most winning team, Constructor, Drivers', number of race victories. So, at the end, I think it really is an honour, because when I was a kid, I was a fan. And so I never thought I could be here.

Otmar, one of the biggest news stories coming into this weekend was confirmation that Sebastian Vettel will race for Aston Martin next year. What does his signature mean to the team?
OS: Well, we took a bit of time to make the decision between Sergio and Sebastian which just goes to show what a great job Sergio has done for us for the last seven years. However with Aston Martin coming in, and a bit of financial backing behind the team, a new factory happening in Silverstone, improving the team, adding twenty per cent more personnel, we've got some infrastructure too, that we're embarking on to make this go faster, and therefore a driver like Sebastian who brings with him the experience of winning four World Championships and 53 races can only be beneficial for us. And he will help us take that next step that we all need to take in the coming years such that we can consistently race among the top three, top four teams.

And what are you giving away in letting Sergio Perez go?
OS: Well, he knows the team well, he's got loads of experience. He's a tenacious racer come Sunday, he's a good qualifier. Rarely makes mistakes, brings home the points and if there's a sniff of a podium, he's usually there. So yeah, we are giving away quite a bit and I wish Checo the best of luck. He deserves to be in Formula 1 and I hope he can find a spot and we're racing against him next year.

Guenther, coming to you, one of the potential vacancies for Checo Perez is Haas. How interested are you in hiring him for next year?
GS: I think Otmar did a pretty good sales pitch for him. He must be his agent as well! What Otmar said is true. He's a good racer but we are just looking. There are a lot of candidates out there at the moment which we are talking with, which we are thinking about and we just need to come up with a decision. For a team, it's quite good to be in the market because you have got a lot of things which you can pick up. We are in no rush to do anything and we just think it through, we come to a conclusion with an answer when we are ready.

What are the criteria you're looking for? How do you approach the problem of driver selection when you have so much choice?
GS: I don't want to go through all the criterias but it needs to be a package, and what we need to see, how do we want to... what do we want to do in the future? How it is best of the team? We're not just thinking about next year. Then, if you're short on thinking, it is pretty easy: you try to get the fastest guy as quick as possible in. But we are thinking about the next five years after we have signed our Concorde Agreement now. So, we want to build up again, that we are getting back to the results that we had in 2018. That takes a bit more time to think it through: financially, talent, it's a lot of things coming into play. And that is where we are. As I said, we are in no hurry.

Mattia, from a performance point of view, things look better, certainly in FP1 with Charles being P3. How confident are you of maintaining that form as we head towards the business end of the weekend.
MB: Not at all. Not at all. I think it is a brand-new circuit for everyone. Each single driver, each single team. I think the track will pick-up speed as well, so I'm pretty sure all drivers and teams will now look at the data, adapting their driving style and they will be a lot faster obviously this afternoon in FP2 and then later in the weekend. But I think, as we said, hopefully Belgium and Monza have been outliers for us. These were certainly different tracks where low drag is required. So we hope that here at least we can to our level of competitiveness at the start of the season, which is certainly not still great but at least we're where we were before. Yes Charles did a great lap, he got the confidence with the track. I think he drove well - but still there is much to do, much to come as well on our side, looking at the data, the sectors and progressing through the weekend.

(Luke Smith - Autosport) Question to Otmar. Otmar, you've just done a Sky F1 interview where you've said that Checo was kept aware about your talks with Vettel, even though he's claimed yesterday 'nobody told me anything'. He also said yesterday that we could have appreciated a bit more clarity from the team about next year so he could have got a Plan B in place a bit sooner. Do you feel there's more that Racing Point could have done to maybe help him for next year and keep him up-to-date with things?
OS: We did keep Sergio up to date as well as his manager Julian. When the decision is a difficult one, and it hasn't been made, there really isn't much more that you can say. So yeah, I don't think we could have said anything more, otherwise we'd be guessing what the future was.

(Dieter Rencken - Racing Lines) A question to both Guenther and Otmar. To do with the arbitration over the Column 1 money back to 2018. I believe that's come to a conclusion. Please could you tell us where your respective teams sat on the matter?
OS: We're pleased that it's come to a conclusion and we can now, the entire team, can focus on what we're here to do, which is go racing and entertain the fans. We're happy that it's behind us.

Guenther, anything to add?
GS: No, nothing to add. What Otmar said is right. We move on.

(Christian Nimmervoll - motorsport.com) Mattia, Toto Wolff said at the Silverstone press conference that one of our main competitors with a 3D camera was scanning the Mercedes cars inside and outside the garage. Main competitors suggest it was either Red Bull or Ferrari. Can you just clarify if you feel addressed by this statement of him?
MB: Honestly, no idea. I've no idea if someone was scanning their car. Certainly it was not us. Honestly can't comment on it. I think that taking pictures, scanning, I do not see any way, anyhow a problem with it. I think what is wrong eventually is to do reverse engineering on entire car. But I think that one now has been clarified in the wording by FIA and I'm happy with that conclusion.