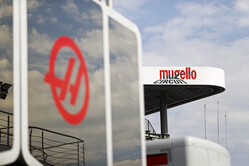 Haas team boss, Guenther Steiner has admitted that the American outfit is considering as many as ten potential drivers for 2021.

Speaking at Monza last week, the Italian made it clear that the team is seeking continuity and that whoever drives for it next season will be in the car for the year after when the raft of new rules are introduced.

Speaking at Mugello, though refusing to name names, Steiner revealed that the list of potential drivers features as many as ten names.

"We are speaking with everybody, and we need to see what we want to do and then decide what we are going to do," he told reporters, just hour after Sebastian Vettel was revealed as Sergio Perez' replacement at Racing Point. "I don't think there's many seats free in the moment anyway, so that is on my side."

Indeed, other than Haas, Alfa Romeo has yet to name its line-up, as have AlphaTauri and Williams.

"Everybody's considered, who is on the market," said Steiner. "We lay everything on a table and then we see what we want.

The Italian admitted that he has previously talked with Perez, with whom he shares a good relationship.

"I respect him a lot, you know what he did," he said. "I mean, as was always said with Sebastian, it's a pity if we would lose him in Formula 1. The same with Nico Hulkenberg not being here. They're all good people. I don't know what we're going to do. As I said, there are a lot of options there."

Asked if there is a shortlist, and if so how many names it comprises, he replied: "There are close to ten...

"It is amazing what is around in the moment," he admitted. "That's why you see me very calm. Because there are only the twenty seats, and we have got ten potential people which could do the job, which is good. Two of them we have got already."