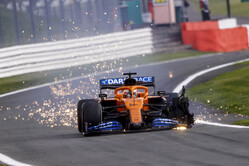 While the pandemic has forced F1 into a situation whereby the 2020 cars are retained for next season also, a number of regulations changes are still to be introduced.

The most important of these relates to downforce.

Due to increased loads on the tyres this year, combined with the fact that Pirelli is to continue with the current compounds, there were fears that as the teams continue their aero development the loads would increase further.

Fearing a repeat of the issues witnessed this year, the FIA is introducing a number of changes aimed at reducing downforce and thereby easing the load on the tyres.

"We feel that downforce has increased a bit too much," admitted Nikolas Tombazis, the FIA's Head of Single Seater Technical Matters, over the Spa weekend, adding that the aim of the regulation changes is to see downforce levels "somewhere between that of last year and this year".

"We have communicated to the teams a number of options which were considered," he revealed, "and hearing the teams' comments, we selected a shortlist of things, which is three different small modifications.

"We will eliminate some slots on the side of the car on the edge of the floor; we will make the rear brake duct winglets, 40mm narrower, and the diffuser fences that currently are further inboard, will be limited to the step plane, and will hence be chopped up by 50mm.

"We think that some of these changes equate to approximately a total of about 4-5% of the overall downforce the cars have," he added. "And we of course have made the diagonal trim on the floor edge already from May, and that is obviously in addition to that.

"So in total I think we expect maybe about 10% reduction, and teams will be gaining 4-5% through normal development. "It's an inexact science," he admitted, "because we don't know how much teams will find in performance, but these are our estimates."

Asked if the move was in reaction to fears over tyre safety, the former Benetton, Ferrari and McLaren aerodynamicist, said: "The car and tyres are a single unit working together. We will have the tyres next year for the third consecutive year, which is an anomaly of course because of the COVID crisis and because the very intense race schedule we have now would have made any testing impractical for new constructions.

"And in the meantime, we have the aerodynamics teams of each Formula 1 team working hard to make their cars more competitive and find more downforce, so we have two things that should not go together.

"That's the reason for our intervention, and therefore the cars will be safer than this year, certainly a lot safer than if we had done no intervention at all."

Over the Mugello weekend, team bosses were asked about the changes and how their teams are reacting to them.

"Obviously, when you are developing a car you need to target the level of downforce efficiency," said Mattia Binotto. "I think certainly, if we look at ourselves, too much drag in 2020, we are aware of it and certainly we need to reduce it, so we've got clear targets. The cut-out has been assessed. At the moment in the wind tunnel and on simulations, we are working towards that."

"We looked into the changes to have less downforce next year, and we are working on it," said Guenther Steiner. "The outcome is not fixed yet but it looks like it's easier to get rid of downforce than to gain it, so it shouldn't be difficult to do but you need to be efficient in how you do it.

"So, we are working on it and yeah, it's work in progress."

"We've started work on it," added Otmar Szafnauer. "It's not an insignificant change, so there is going to be work required to gain back some of the losses that we've experienced. That'll take up a significant amount of our ATRs just to gain that back."

"I think it's a bit of a tricky one," admitted Christian Horner. "I think the teams will get back all the downforce that it perhaps takes off.

"Maybe more could have been done because the rate of progress in Formula 1 is such that if there is concerns about the load on the tyre then yeah, maybe more should have been looked at, but of course whenever you change something, it does introduce cost because whatever you change creates differences so it's finding that balance."

"We are just studying this new regulation," added Franz Tost, "of course, we will lose a lot of downforce, but as I know, the development speed in Formula One I would not be surprised if at the beginning of next year or maybe a little bit later, the downforce level will be the same.

"Regarding the costs, nothing will change. There were a lot, the current diffuser and floor, or another one, at the end it's just the same."

"It's a bit early stage for us," admitted Frederic Vasseur, "because we only got the final regulation last week or the week before, but for sure it will have a big impact on the downforce.

"I don't want to speak about points but it will be huge," he continued, "and it's also probably necessary for the tyres that if we are still developing the car and we want to keep the same tyres we put the responsibility of this on Pirelli; at the end we will do a choice and I think it was the right move from the FIA."