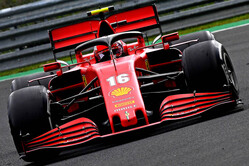 Though Ferrari plans a "small" upgrade for the Russian Grand Prix, Mattia Binotto warns not to expect too much of it.

The Italian team, which marked its historic 1,000th Formula One World Championship Grand Prix with a lacklustre performance, has already made clear that there will be no "silver bullet", no quick turn-around in fortune any time soon.

Other than an underperforming engine, the SF1000's aero is not up to the job and the Maranello marque, having already slipped to sixth in the standings, is only 13 points ahead of AlphaTauri.

Revealing a small upgrade for next weekend's Russian Grand Prix, team boss, Mattia Binotto warns that not too much should be expected of it.

"There will be small upgrades, but this will not change the big picture," warned Binotto. "I think we are at the moment out of pace in the race, and we are somehow wearing too much the tyres.

"The upgrades will not be the ones that address it," he admitted. "I think on our side we need to review the projects, with the view of 2021. I think it will take some more time to do it."

In terms of 2021, while the Italian team plans an "all-new" engine, despite the restrictions in terms of chassis development, Binotto believes the token system will allow the team to make some much-needed improvements.

"The next single-seater will necessarily be an evolution of this one, because of the limit of the rules," he told Corriere della Sera. "But there are opportunities.

"The engine will be all new," he added, "it has been running on the bench for months, and we are counting on it.

"Plus, in these days , there is an important aerodynamic change being voted by the World Council, with modifications especially to the rear," he continued, referring to anticipated changes to the floors next year in a bid to reduce downforce. "It is a possibility to exploit."