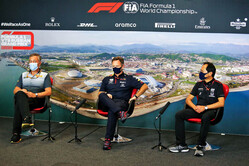 Q: Tanabe-san, it was a frustrating couple of races for you in Italy. Can you tell us what was the cause of the issues on Max Verstappen's car and are you confident you have cured the problem?
Toyoharu Tanabe: I don't go into very [great] detail but it was very complicated issues and many parameters involved in that issue. After the race we analysed the data and tried to understand what happened, especially just after the race. We identified the root cause of the issues and this race we have applied the countermeasures to fix the problems. It should not happen again.

Q: Have the AlphaTauri guys experienced the same problems?
TT: Not it was a very rare situation. It was the first time since we started Formula 1.

Q: Good. Let's look at the positives, in that Honda has won with both of its teams now this year, becoming the only power unit manufacturer to win with more than one time in the hybrid era. How much satisfaction does that give you?
TT: Actually we are very happy with Gasly's Monza win and so we mean, I believe, Honda and the Red Bull family. AlphaTauri based in Italy and then Gasly has been working with us since Super Formula in Japan and he started with us in the Toro Rosso era. And he showed the people a very strong race, so he led the race for half distance. It emphasised very much our passion. Japanese fans were very happy to see his win and his podium. We keep pushing for both teams, working very hard with both teams to improve our performance.

Q: Thank you. Christian, let's throw it forward to this weekend. Your team has never finished on the podium here in Sochi. Is this is a trend you are confident of reversing?
Christian Horner: Thanks for reminding me of that Tom. It's been a bit of a bogey track for us over the last five years or so. I think Mercedes have won every single event here, so they are obviously very much the favourites for this race, yet anything can happen. We've had a frustrating last couple of races and obviously we come here... we know it's going to be more of a challenge, but hopefully we'll survive the weekend and then there are some tracks coming up that hopefully play a little more to our strengths.

Q: What were your guys, the drivers, saying during FP1 this morning?
CH: They said the traffic is awful and that people don't look into their mirrors. It's a unique track here. It's very short corners, 90 degree corners, and you know, it's quite a challenge. But generally they were reasonably settled. Obviously the circuit is still very green and there is not a lot of rubber down. I think the times were a little bit... about half a second of the times they were doing last year, but it's hotter as well, and that's also having an affect.

Q: Let's talk about Alex Albon. He said, after getting his podium in Mugello, 'thanks for sticking with me'. He was obviously feeling vulnerable going into that race, for him to say that. Will that result free him of any concerns that his future is in doubt?
CH: He only feels vulnerable because you guys keep telling him every week that we should put someone else in the car. I think it was really good for him to get that result. He came close in Brazil last year, he could have won the opening race in Austria, and obviously got turned out of that race, so to get that first podium... and he had to do it the hard way. Daniel is one of the hardest racers on the track and to pass him around the outside of Turn 1 as he did, it was a great performance from him. You can already see him walking a little bit taller. That confidence that it will give him, hopefully he'll build on that. He has got the full support of all the team. I think the team is doing a good job with him. His race engineer is extracting more from him and that confidence is growing.

Q: What was your reaction when Eddie Jordan said recently that Lewis Hamilton would be a good fit alongside Max next year?
CH: I wondered what Eddie had been drinking. Look, from a fan's perspective he's absolutely right, but I've not heard from Lewis recently, so I can only imagine he's staying where he is. I think everyone wants to see Verstappen and Hamilton go head-to-head and hopefully we can give Max the tools to do that, certainly in the remaining races of this year but very much so next year and the year after.

Q: Mario, you've gone a step softer with the compounds here in Sochi compared to last year. Can you just explain why you've made that decision?
Mario Isola: Yeah, mostly because if you look back at the race last year, most of the teams, or all the teams, were focusing on the medium and the soft, so the hard was not used, but we also have an example two years again when we decided to be more aggressive in compound selection and the teams had to manage the compounds quite heavily, for the reasons Christian just mentioned - the traffic here is an issue, it's difficult to overtake, and also the pit lane is very slow so an additional pit stop can cost a lot to each one. But we know that we also have a new specification from 2019 compared to 2018 and this a bit more consistent, so I believe that even if we have a softer selection of compounds this year they can push a bit more compared to last year and all the three compounds are suitable for the race. This morning more or less all the teams used the three compounds on different cars, that means they are trying to understand the performance of the different compounds. The track was not in a fantastic condition. I can imagine a lot of track evolution for this afternoon. The weather is slightly different. There are a lot of elements that are playing a part in building a strategy for the race, so hopefully with this selection we have a mix of one and two stops for the race. We will see tomorrow. The qualifying will be a good indication. If the top teams are going to qualify with the medium, to start the race with the medium is an indication or not, let's see what happens tomorrow in qualifying.

Q: (Christian Nimmervoll - Motorsport.com) Tanabe-san, Honda is contracted to Red Bull until the end of 2021. When do you expect a decision from the board if Honda is going to remain in Formula 1 and if the answer will be a yes, is it set in stone that it's going to be a continuation of the exclusive partnership with the two Red Bull teams?
TT: Actually I'm not involved in that discussion at all. I'm taking care of the technical side so I have no answer to tell now.

Q: (Christian Menath - motorsport-magazin.com) Another question for Tanabe-san: if I remember correctly, Max Verstappen was reporting some problems after his qualifying lap at Spa, that he ran out of electric energy and I think Pierre Gasly had a pretty similar problem in Mugello two weeks ago. Do you see a pattern; was it the same problem and why did this problem occur? Did you underestimate the performance on a qualifying lap, or what's the problem?
TT: It happened because of the slightly different application so we maximised the energy usage for the lap. So if you remained energy after the finish line, it means you lose the performance so we maximise how to use the energy and the lap was slightly different conditions, that's why it happened for both cars.

Q: (Scott Mitchell - The Race) Christian, just going back to Alex's performances; obviously there have been some quite clear examples of progress but just not quite piecing together a full weekend, so from the outside, perhaps, other people have missed that progress but I guess that speculation will only remain until he's 100 percent confirmed in Red Bull for next year. So do you have a timescale in mind for that?
CH: It will certainly be before Christmas. Obviously all the drivers are under contract to Red Bull on multiple years, so there are trigger points at different times in their contacts but it will certainly be later into the autumn. Our intention is to retain Alex, he's doing a good job, he just needs to build on the kind of performances he put in in Mugello and obviously continue that development.

Q: (Louis Dekker - NOS) Verstappen's contract clause; is it realistic to think Max can leave Red Bull after this season because the team's targets have not been met or are you one hundred percent sure he'll stay for 2021?
CH: Well obviously the contact between the driver and the team is always going to be confidential, there will always be speculation regarding it but I'm a hundred percent certain Max Verstappen will be in a Red Bull racing car next year.