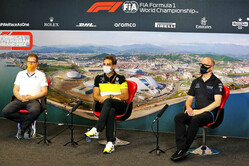 Q: Let's start with just a quick resume of FP1 if we could. Andreas, why don't we start with you please. How was it down at McLaren?
Andreas Seidl: I would say it was not the most straightforward session for us today. As you have seen, we have lost one car early with Carlos going into the barrier, which was upsetting our programme a bit and we couldn't go out any more because we had to change the rear crash structure for Free Practice Two. On Lando's side, with the red flags and the Virtual Safety Cars it was also not a straightforward session because we couldn't have the clean programme that we were wishing for with trying some new components again. But it's still early days and it's simply important now to reset again and then see how we can progress in Free Practice Two.

Cyril Abiteboul: Fairly straightforward session for us, for a Friday morning. Lots of... a bit of test going on in the background to try to understand a bit better what everyone is seeing from the outside, which is also to a certain degree puzzling us from the inside, which is the discrepancies we seem to have in certain conditions. So we've conducted some aero tests to try to get on the bottom of these questions. The pace seems to be OK but the drivers are both complaining that a balance is difficult to find. Even though it's looking a bit good on the timesheets we know that there was lots of yellow flags and red flag, so we are treating those positions very carefully.

Simon Roberts: Yes, so unfortunately a disrupted session for us as well. On George's side we went through the programme. Everything was to plan, we were basically just trying to get the right set-up, starting the set-up work for tomorrow. No major dramas. As the guys have said there was a few red flags, yellow flags. George missed one turn but nothing major, so yeah, that all went as expected. Unfortunately for Nicholas, went off on Turn 10, one of those classic 'punishment doesn't fit the crime', he had a little bit of understeer going in, just lost the back end and collected the wall. Car's back in the garage, there's quite a bit of damage, we're assessing that now. Obviously we lost the rear wing and the bodywork down the side but we're already into that. So, hopefully the guys will turn it around and see where we get to in FP2.

Q: Andreas, coming back to you, you've said already it was a disrupted session for McLaren but how do you rate your team's chances here? Both cars were in the points last year - is this an opportunity to put pressure on Red Bull and bag some big points?
AS: Well, I don't think that Red Bull is the team we are targeting this year. As I said, we had a good race here last year, we were quite competitive but I'm very careful at the moment predicting how the weekends go because we also thought in Mugello it's a track that suits us. It's particularly important to focus on ourselves again. It's important to simply get through the testing programme on Friday, making sure that the upgrades we are bringing are working and hopefully we can carry them forward into the race weekend. We know that competition is strong; everyone is bringing upgrades and still improving their cars. Renault made big steps forward in the last couple of races. Racing Point brought an upgrade to Mugello that looked really, really strong, also Ferrari is a team we never underestimate. So, we have two good drivers, a good team and it's going to be important to maximise the opportunities going forward - and that's what we will try again, also this weekend.

Q: Cyril, can we talk about Fernando Alonso. He was in the factory recently. How did you find him? What feedback did he give you on the simulator?
CA: Not sure I want to comment on the simulator specifically because it's not necessarily the main strength of the team and we are working hard to improve in that area. That's typically an area where there has been a lack of investment in the last few years - but on a broader perspective first we saw a Fernando that's happy to be back not yet in action but back in the team environment, in particular a team that he knows and where he obviously has good souvenirs - but souvenirs are not a reflection of what's going to happen so we need also to be forward looking. I think, being on the Viry side - because I can't travel in the UK myself - I was not in the UK but I can tell you that he was really impressed by all the changes in Viry, all the new people, the energy, the drive, the determination in Viry that there is in developing a new PU for what is now 2022. It was supposed to be '21 but it's shifting back a year. Obviously I'm biased when I say that but it's something that is extremely important to us, so see Fernando and to see his pride and the excitement in his eyes. He's also been a witness to all the changes in Enstone - but a nice building is not again a statement of what's coming. So, we just need to work very hard to make sure he has a car that he wants and also that he deserves.

Q: When are we going to see him testing a car?
CA: One thing that I can say is that he's definitely keen on getting back behind the steering wheel, so we'll see that. We are building the programme. There is a couple of opportunities within, obviously, the restriction of the sporting regulation. Things like filming days that we've not done so far, there is a post-season test that I have already commented on - we'll see where we get there. We also have a two-years old car programme that we can run pretty much anywhere and he will probably do a bit of that also. So, you'll see him in action. I can't say here where and when exactly yet.

Q: Simon, you've been in the job as acting team principal for a few weeks now. How are you finding things?
SR: It's pretty busy, pretty hectic obviously. It's a big step up, I'm very proud and honoured to be asked to do it but there's a lot to do in the factory. We're trying to make sure we keep the management team stable with the new owners, so that's really important for them and the rest of the team. So, me stepping up makes us able to do that. We're now working with the new owners pretty much every day, looking at what we need to do to improve. What the long-term programme is and how do we find some performance for the whole team over a long period of time. There's no quick fix here. We're in it for the long haul and so are Dorilton.

Q: What are their immediate goals? What have they said to you?
SR: They're just trying to right now understand everything they can about the business. They're super-smart and really nice and easy people to work with, so it's great having them around. They just come and get involved in everything they can. They obviously were in Mugello, which was great for them and we're just in that budget setting, looking at investment plans, trying to figure out effectively what's the first thing to do. We don't want to make mistakes but everything we do is focussed on improving our performance in the long term.

Q: (Dieter Rencken - Racing Lines) Cyril, in August, Pat Fry wrote an email to the FIA requesting clarity on the status of listed components, the definitions on intellectual property etcetera. Have you have replies and are these satisfactory?
CA: As you know Dieter, up until a certain point these communications with the FIA are confidential matters but we expect that at some point they will become public material because we believe that they are very important for any team to make sure they comply with the stance of the FIA on these things after obviously the precedent of this year and the controversy of this year. We have had a response from Nikolas. He is in the process of turning that into something more formal that can then become public.

Q: (Christian Nimmervoll - motorsport.com) Cyril, you recently announced the rebranding of the team and the restructuring of the programme. As I understand, you also took over responsibility for promoting the Alpine brand in the process. The question is: are you going to remain team principal - or is your role going to change in any way with people in Enstone like Marcin Budkowski taking over more responsibility?
CA: The exact situation is that I have been asked by the CEO Luca de Meo to take as an extra mission the structuring of Alpine as a car company, as a brand but not just a brand inside of things but what's the product strategy, what's the business model within the context of Renault Group changing massively of organisation, and also strategy, given the overall situation. It's a mission which I started, which I will have in hand in a couple of weeks and part of the deliverable of that mission will see obviously some proposals in terms of structure that I absolutely do not want to comment on here and now. What I can tell you is that I remain in the context of that mission until the end this year fully committed in my role as team principal.