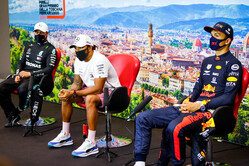 Q: Alex Albon, well done. You must be tremendously relieved?
Alex Albon: Yeah, it was good. Obviously, a while to get here but no, it was a tough one as well, we had to work for it. But no, I'm really happy. I'm really happy. I can breathe. It feels nice to be here.

Q: You say it was a tough one. Very unusual to have to make those extra restarts, but from a physicality point of view we were all teeing this up as one of the mighty race tracks. Just how tough was it in the car?
AA: Actually, surprisingly OK. I was expecting it to be worse. But we had two red flags so that did help it. It's brutal, especially the high speeds in Sector 2, you feel it. Otherwise I think there was more adrenaline going into my body than anything else, so I'm happy.

Q: Once again, you showed you are one of the most instinctive racers. You had to fight hard with Daniel Ricciardo, one of the other great instinctive racers out there. You seem actually relatively under control, I think I'd be anticipating the taste of that Champagne a bit more.
AA: Yeah, it was good. We just couldn't get off the line so most of the overtakes I had to get it done on the circuit. But our car is good on the brakes, we've known that since day one so we can do moves like that and it's fun to drive.

Q: Valtteri Bottas, what could have been, had that safety car restart had worked out for you. Where's you mind at now as you realise that you didn't get the win today?
Valtteri Bottas: It's disappointing as obviously it was like a dream start for me for the race. The start was really good and I also managed to hold pole position for the safety car restart. I don't really remember all the phases but it seemed there were no opportunities once I lost position at the second start, but that's how it goes.

Q: You're so close. You're so close in qualifying, you are so close in the race. We're at the half way point of this championship. What can you do now? We have a couple of weeks until Sochi, a track that you do go well on...
VB: I'll just keep pushing. I'll keep pushing and keep trying to get better. It has to turn out well for me at some point.

Q: You're fit, you're fast, but what particular area do you need to pick up on?
VB: I don't know. I've lost many qualifyings this year with just a few hundredths so I think that's the first thing: to try to get those few hundredths to my side.

Q: Lewis, I know you say you don't look at the stats but you've just rounded it off at a nice 90 grand prix victories, you're sixth victory of this year. You had to work at that one; it wasn't plain sailing. Can you remember all of the phases of the race?
Lewis Hamilton: Well, it's all a bit of a daze. It was like three races in one day. Just incredibly tough today. I think obviously with a difficult start. This track is phenomenal. The heat. Keeping Valtteri behind me, who's been quick all weekend was not easy, and obviously I was behind him at the beginning. All those restarts and the total focus needed during that time. It was really, really hard.

Q: So physically tough. Any other concerns out there. We heard you talking about your tyres before the stop. You seemed to be reasonably comfortable with the, Valtteri seemed to struggle a bit more with his. Anything else out that stood our as tricky points during the race?
LH: Not really. It was those restarts. The first stint I was fine, managing my tyres and I didn't need to stop. It was just they were worried because Valtteri had a problem and then you obviously see the things unravelling those next laps and the last one I started on the softs, which was a used tyre, and not knowing how far that was going to go. And then Valtteri appeared out of nowhere, when I saw Danny was behind, and he was on it. There were times when I was looking after the tyres and all of a sudden he would close up. So keeping that over one-second gap, because this is a long, long straight, it's a thousand metres or whatever it is, and I didn't want him to have DRS. My heart is definitely racing and it's crazy to be here and have 90 grand prix victories and uh... justice for Breonna Taylor.

Q: Lewis, that has to be one of the craziest races of recent times. How do sum it all up?
LH: Hectic! Such a rollercoaster ride, I think, mentally and emotionally. Emotionally and physically, sorry. All these guys have done an amazing job. Valtteri was so quick all weekend so keeping him behind in the starts and stops we had, I wouldn't say it was easy to stay in the zone. But really, really grateful to the team for running up and down the pit lane, I think we had the furthest to go. For their composure, I think they did an amazing job. Really proud to be a part of it. Ultimately really proud of my performance today because it was not easy keeping these guys behind.

Q: Valtteri, how frustrating was this race for you? You did everything right at the first start?
VB: For sure it's disappointing. I think frustrating is not the right word because I felt I really tried everything. At least the first part. The first race start was absolutely perfect and the restart I managed to keep my position and felt like the pace was good. Once I lost the position to Lewis at the second start I tried everything I could to get it back but I couldn't and he obviously was faultless today and it was a pretty crazy race. It really feels like we had three races today instead of one. I tried and I feel it's just a matter to time that things will go my way and it will come and I will keep pushing.

Q: Alex, coming to you, it's great to see you on the podium today. After two near-misses, how much of a relief is this result for you?
AA: Yeah. It was a good race obviously. It was nice to finally get that podium but under the circumstances as well. It was a tricky race. We weren't very good off the line so a lot of the overtakes had to be on the track. It made it exciting. We had a really good car today and fortunately we were able to extract it and do the overtakes when we needed to.

Q: (Alan Baldwin - Reuters) Question to Lewis. Congratulations for the win. About the t-shirt that you wore at the start and at the end obviously, the Breonna Taylor t-shirt. Is this a change in the anti-racism campaign? It was always Black Lives Matter up until now. Is this an individual change - rather like Naomi Osaka's face masks at the US Open?
LH: Not much of a change, it's still fighting the same thing. It's just... it took me a long time to get that shirt and I've been wanting to wear that and bring awareness to the fact that there's people that have been killed on the street and there's someone that got killed in her own house, and they're in the wrong house, and those guys are still walking free and we can't rest, we can't... we have to continue to raise awareness with it and Naomi has been doing amazing, so huge congratulations to here, and I think she's an incredible inspiration with what she's done with her platform. I think we just have to continue to push on the issue.

Q: (Scott Mitchell - The Race) Question for Alex. I'm going to test your memory I'm afraid Alex. Could you just talk through how you felt in the two moments after you slipped back and it looked like maybe the podium wasn't on the cards. And can you also just talk through that pass on Daniel Ricciardo. That looked like a perfect blend of judgement and bravery.
AA: It wasn't easy. When you lose positions at the start you always feel like it's going to be more hard work but you never doubt that you can get back up there. It wasn't an easy track to overtake. On the first stint I used a lot of my tyres to overtake, I think it was two cars, or whoever I did overtake and on the Mediums we were actually strong. I knew the pace was there - I was just a bit afraid because, with another red flag, it meant I would have been happy just to maintain position but the Renaults seemed to be very strong at starts and the Racing Point was also strong. I was fired up when we lost another two positions - or another position off the start - but I knew also that we had the pace. It was more about patience during the race and making sure you don't overdrive the car too early, the tyres too early, so you had something left for the overtaking later on. And yeah, with Daniel... we were good in the last corner. That was... we've been good in the last sector all weekend and that's really important for a circuit where there's only one place to overtake and that's Turn One. The Renaults are quick down the straights so I didn't catch him as quick as I thought I would, and it was kind of like a last-minute dive on the outside. Of course, I was a little worried, but I left enough space and Daniel gave me enough room and I went past.