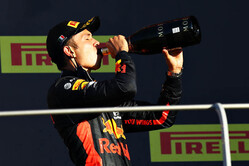 Alex Albon: "I'm really happy and it took a while to get here! It's something I've always wanted and one way or another we haven't been able to get it so to be there today is pretty special. It's really nice to give the Team something back after they've supported me since day one and show them what I can do. It was a tough race and definitely not one of the easy ones. This track is brutal, especially the high speed corners in sector two, and with so many re-starts to manage we had our work cut out. We struggled to get off the line so I knew I had to be aggressive to get all the overtakes done but we had a really good car and we know it's good on the brakes so we used that to our advantage. When we lost two positions on the final re-start, I was fired up as I wasn't going to let the opportunity of a podium go by so I pushed hard to get third and I'm over the moon with today's result."

Max Verstappen: "I am of course very disappointed as I know this could have been a really good race for us. I had a good launch at the start of the race and went around Lewis but then the car just didn't accelerate so I lost a lot of speed and had no power. I then dropped back into the midfield and got hit from behind. When you drop into the middle of the pack in the first few corners like that it's quite easy to get involved in a crash so I'm not disappointed about that, we shouldn't have been in that position in the first place. There isn't much more to say but it is just really disappointing for the Team that we had to retire again, especially when we looked so competitive but it is of course good to see Alex maximize the result and get on the podium."

Christian Horner: "A bittersweet day but it's fantastic to see Alex take his first F1 podium. He's done a great job all weekend and he had to pass some tough competitors to fight his way back through the field after a couple of difficult starts. All credit to him because he hasn't let the negativity or external criticism get him down, he's picked himself up and put in a first class performance. I think this podium will give him a boost of confidence and self-belief and I'm sure he will only get stronger from here. Unfortunately, Max was unable to show us what he had today after such a promising qualifying and positive feeling ahead of the race. He did the hard bit with a great initial launch and was alongside Lewis, but then he experienced a loss of power which caused him to drop into the middle of the pack where he was hit from behind, ending his race in the gravel. It is enormously disappointing for him because he was really up for it today and you could see we had a good overall package. The issue is being looked into by Honda and the Team in order to ensure this does not happen again."