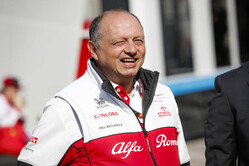 Franz, we're at Ferrari's 1000th race this weekend, can we start with you giving us some of your best memories of watching Ferrari as a Formula 1 fan?
Franz Tost: When Niki Lauda won in Jarama, I remember quite well. There were also many other special events. I remember when Jacky Ickx was second behind Jochen Rindt at the Hockenheimring, I prayed to God that he stayed behind. Of course, Ferrari is the most well known brand in Formula 1. It is in Formula 1 since the very beginning and had very successful periods when they won races and won championships. The last very successful period was with Michael Schumacher and this was a fantastic time. Also I was a little bit involved there as I was working with Weber management. I can only congratulate Ferrari for this 1000th grand prix and wish them another 1000 races.

Christian, same question to you. Your memories of watching Ferrari as a Formula 1 fan?
Christian Horner: I'm not quite as old as Franz, so I don't go back to the '60s and '70s but look, Ferrari are an iconic team. Those red cars, whenever you saw them... I remember the V12s when Nigel Mansell and Gerhard Berger were at Silverstone. The noise of the engines was just amazing. There has always been this mystique about Ferrari and everything they've achieved over the years. And then obviously competing against them. Obviously in our early days there were doing the dominating with Michael and the incredible job they did during that period and then the time with Alonso. They're tough competitors and a great, great race team, with so much history. Ferrari are synonymous with Formula 1.

And Fred, your thoughts please?
Frederic Vasseur: Well, I'm the youngest one...

FV: No, no. But it's last year with Charles in Spa for me. It was a great one, even if the weekend is tough. But for sure that if you look at every single decade they were always there, performing, winning races and it's like an honour for us to race with them today. We can be all proud of this and the story of the build-up over the last 50 years in F1, it's magic.

Franz, what a race for your team last weekend in Monza. Now that you have had a few days to reflect on it, how proud are you of what Pierre and the team did at Monza?
FT: I must say that Pierre and the team did really a fantastic job because Pierre controlled the race, it was not just a lucky punch and a few laps. OK, we had some luck because of the red flag and the Hamilton penalty, which helped us a lot obviously, but after the second start, once he overtook Stroll, he was controlling the race and how he controlled it, how maturely he drove, this was really something exciting to observe on the pit wall. When Carlos came a little bit closer he immediately reacted. We were very fast in sector two. We had a little bit more downforce than the McLaren and therefore he deserved this victory and it was really a fantastic drive from his side.

How have you celebrated this week?
FT: We didn't have time for a celebration. As you know it's a back-to-back race. The race team in Monza had to dismantle everything, disassemble the cars, bring everything here to Mugello. And on Wednesday in the factory, Daniil and Pierre visited us and then we went from department to department, because we have quite strong rules regarding COVID-19, and each employee got a glass of Champagne and they made photos together with the drivers, always five people only. It took a while but the employees were very happy about this and this was everything on our celebration.

And on an emotional level, how did that win compare with Sebastian Vettel's victory back in 2008?
FT: A victory always is something very emotional. We all were very happy, but you know, a few hours and the job goes on. The next target is in front of us and this is Mugello, to have a good race here, and that's important. Monza is past tense.

Christian, what was the root of your problems in Monza and were you surprised by them?
CH: Well, the car was never particularly happy in a very low downforce configuration, so qualifying fifth we felt with Max we still had a chance in the race, Alex in P9. It wasn't the best first lap. We lost quite a lot of performance at the start because the car overheated and it did likewise at the second start and then unfortunately we had the retirement. So on a day when Mercedes didn't, for once, dominate proceedings, we were unable to capitalise on that, which was frustrating. But in the event that we were unable to, it was great to see AlphaTauri, Franz and Pierre get that victory. Monza for us felt like an opportunity lost.

Are all your bogey tracks behind you now?
CH: I don't know! I hope so! Mercedes are so strong at all the circuits. But I think this track plays a bit more to our strengths than Monza. There are still some good circuits coming up. It's great to be here. I raced here in 1997. It's just a phenomenal track. Other tracks we're going to - Imola, Portimao, we're going back to Istanbul this year, this improvised calendar has got some great race tracks on it this year.

Well, it's been a great start to the weekend with Max P2 in the first practice session. How confident are you of challenging Mercedes?
CH: They're so complete at the moment. They have been truly dominant. So we are working hard, we're continuing to develop the car as hard as we can in order to understand some of the issues that we have had with the car and I think we're starting to get on top of that now. Hopefully we can get a little bit closer this weekend but it's going to be a tough grand prix here.

Is this the most dominant that Mercedes have been in the turbo-hybrid era?
CH: I think it's right up there. Their first year they were incredibly dominant but they didn't quite show their full hand because they had such a power advantage. Collectively, power unit and chassis, they are very, very strong at the moment. But we have shown they can be beaten, at Silverstone, and so that's what we have to focus on, extracting and working to our strengths and getting more out of our car to take that fight to them on a more consistent basis.

Fred, can we start by talking about the effect of Sebastian Vettel's switch to Aston Martin next year. It means of course that Checo Perez is on the market. How interested are you in him?
FV: I think that Checo is interested in all the seats on the grid, available at least. I won't move, I told you last week or the week before, in the course of September we will have the discussion with our drivers about next year and then we will decide together what we have to do. For sure now we have plenty of drivers available on the list.

How long is the list of drivers that you've got talking to you?
FV: You made the list before me...

But with the Ferrari juniors as well, Fred?
FV: Yeah, but you have some Ferrari drivers junior drivers, but you have Kimi first for us, to know what he wants to do and what we want to do with him and then we will see with the other ones.

Now, Fred, if Kimi Räikkönen wants to stay in Formula 1 next year, will you have him?
FV: Yeah, sure, but if we are all interested to collaborate and the collaboration is good, it will make sense to continue.

Final question, let's talk about this weekend: what are your hopes?
FV: That we are targeting to put the two cars in Q2, that we made some steps forwards over the last weekend but we have to continue in that direction but we know that it's not easy, it's quite tight, it's even more tight here in Mugello than somewhere else and Q1 will be difficult with the traffic but I think that we can target to have the two cars in Q2.