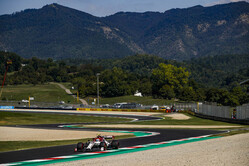 The first day of practice at the Mugello Circuit produced some positive results for the team, with Kimi Raikkonen finishing the afternoon in the top ten, one day shy of the twentieth anniversary of his testing debut for Sauber.

Both Alfa Romeo Racing ORLEN cars looked well dialled-in to the Tuscan circuit, a challenging layout featuring medium- and high-speed corners and constant changes of elevation. P11 and P14 in the opening session of the day were followed by a promising P9 for Kimi in the afternoon, with Antonio in P17 after a small mistake during his qualifying simulation. Leading the pack of Ferrari-engined cars, the two C39s look set to play a part in the fight for a place in Q2, the team's objective for tomorrow.

Most of the day, as customary on Friday, has been an exercise in setup making - an even more crucial task on this circuit, for which no usable data from modern Formula One cars exist. Both our team's entries were able to run issue-free for most of the day, collecting information for our engineers both trackside and back at base, with the only scare being a contact between Kimi and Sergio Perez in the second session, thankfully with no repercussions for the Finn and his car.

Friday times, of course, ought to be taken with a pinch of salt: but the early signs are promising. Tomorrow's qualifying session, on a track on which overtaking can be even trickier than usual, is going to be an interesting affair.

Kimi Raikkonen: "It's nice to be back driving at Mugello, the track where I made my first laps in an F1 car, 20 years ago. Surely my neck feels a lot better now than it did at the end of my first day of testing! The track has the same feel, it's not much different with the exception of some kerbs. It's a difficult circuit, so finding a setup can be challenging, especially being here for the first time and with no data to use as a reference. It's quite a unique layout in many ways and it needs a different approach, which is why we need to keep working on the setup, both tonight and in FP3. You never run out of things to improve but we looked promising today, so let's see where we end up tomorrow."

Antonio Giovinazzi: "It's nice to be on track in Italy again, and seeing some fans in the stands. We missed having spectators and hopefully they'll watch a nice race on Sunday. The track here in Mugello is amazing, especially with modern Formula One cars: it's just so fast, with many high-speed corners that really feel great in an F1 car - even if the neck will really feel it on Sunday! The car felt really good from the start today, on both qualifying and race trim, so we can be happy about our first day. Unfortunately, I did a small mistake during my fast lap in FP2 so the times don't reflect how we really did, but tomorrow is when we really need to put together a good lap. I think we can do a good job; getting to Q2 is the target, then we can assess our chances. We saw already that following cars will be quite difficult, so it will be important to qualify as far high as we can, get a good start and build our race from there."