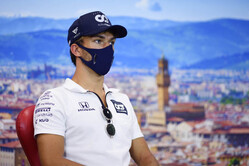 Despite the mask, it is clear that Pierre Gasly is still grinning from ear-to-ear following his win at Monza last week, and why wouldn't he be, it was a win popular with fans and fellow drivers alike.

Controversially dropped by Red Bull after a dozen races, rather than feeling sorry for himself and licking his wounds, the Frenchman sought to prove the Austrian team wrong with a string of solid performances culminating in that Monza magic.

However, while the likes of Lewis Hamilton, and various fans on social media, wonder why the youngster isn't given promotion back to the 'A-Team', Gasly says he is simply happy to be a paid up member of the 'winners club'.

"On what it's going to change for the future, at the moment, I didn't discuss anything," the Frenchman told reporters at Mugello, when asked if there had been any discussions with Red Bull since his win.

"Your first F1 win is always a big boost," he continued. "Obviously winning in lower series is something, but winning in F1, which is the pinnacle of motorsport, is another thing, and my personal target is to fight for podiums on a more regular basis, and wins and championships if possible, so I will always try and be in the fastest car.

"Obviously in Toro Rosso, as Seb mentioned to me on Monday when he called me, we're the only two to have won with this team; he won in 2008 and went on with Red Bull to win four world championships, as we know, and I'm really happy to have joined him in this winners' club for this team.

"We will see what opportunities there will be in the future, but at the moment, I just want to take this time to celebrate with AlphaTauri, with this team, and we still have many more races to go until the end of the year, and we need to make sure we perform at a very high level and the focus is on that at the moment."

Asked about the race, and in particular the manner in which he soaked up the pressure from Carlos Sainz, he said: "I was really happy to be in that fight with Carlos, with the McLaren. I must say I thought that Bottas with the Mercedes, with such a big edge in qualifying, they would come back and probably be on for the win and we'd have to settle for second or third at some point, but quite quickly, I saw he wasn't making so much ground and we had our opportunity and it kind of reminded me of the old times fighting with Carlos in the younger series, and it was a pretty nice feeling.

"I was surprised how great it felt, the first lap after Lewis pitted," he continued. "I was in the lead and I still remember, I just went out of Ascari on that first lap and I thought, 'Okay, now I have the best position', and I missed that feeling of leading the race and just focusing on purely each corner at a time, driving lap by lap and really squeezing everything out from the car.

"Not chasing anyone in front of you and trying to find a gap to make the move. This was the best position ever, and I kind of missed that. I felt like after that, I wasn't even really paying attention to Carlos behind, because it's out of my control. I knew he was fast, I just thought, 'Okay, take one corner at a time, every lap as a qualifying lap and try to be as fast as you can and we'll see what we can do from this race'. But I wasn't too stressed, I just tried to deliver the best of myself and put the fastest laps possible till the end."