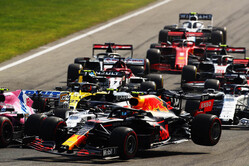 Alex Albon: "That wasn't a fun race and P15 clearly isn't reflective of our true package. We had a lot of damage with the left side of the floor missing after contact in Turn 1 and then with the time penalty our race was basically over. We had no grip and lost a load of downforce so it was a long race where we were just limping to the end. It's been a tough weekend for us as a Team which we thought it could be and then with the circumstances today it's just made it a lot harder. It's obviously a much better day for AlphaTauri so we're happy for those guys but for us, we need to put our heads down and focus on Mugello in a week's time."

Max Verstappen: "I think pretty much everything that could go wrong today did go wrong. I had a very bad start with a lot of wheel spin when I dropped the clutch and from there onwards I was stuck in a DRS train which makes it almost impossible to overtake around here. After the red flag I had a problem with the engine at the re-start which we tried to solve but it didn't go away and we had to retire the car which is of course very disappointing. Now we just have to forget this race and move on to next week at a new circuit we are all excited to visit. It may not have been our weekend but I am very happy for Pierre as AlphaTauri have been very fast all weekend and to win here in Italy is very emotional and a great result for them. They are a great group of people and I hope they are going to enjoy this one tonight because they all deserve it."

Christian Horner, Team Principal: "Firstly, I want to congratulate everyone at AlphaTauri, especially Franz, Pierre and Honda who achieved something great today to take victory here at Monza. Our challenging weekend continued into the race with Max initially bogging down at the start and finding himself in a DRS train which is almost impossible to break around this track. Alex suffered damage from contact at Turn 1 which he also incurred an arguably harsh five second time penalty for, putting him to the back of the field before the safety car re-start. At the re-start Max suffered an engine issue which we were unable to overcome, forcing him to retire on lap 30. The damage to Alex's floor from the early race contact was significant and he was losing around a second a lap throughout the race, resulting in him finishing P15. Certainly not our finest weekend but we will re-convene and work hard to ensure that we are back where we belong next weekend in Mugello."