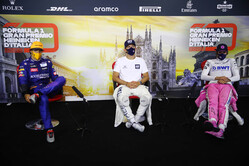 Q: Lance, fantastic podium finish. Are you happy with that P3?
Lance Stroll: I am. It's been a couple of years since I stood on a podium. It feels good to be back. It was such a crazy race. I'm so happy for Pierre. He really deserved it. He had a great start and he just stayed consistent all the way throughout the race. It's a bit of a bummer as I think it was mine to lose, starting from second. But I just had no grip at the start and I had a ton of wheel spin and everybody flew by me. I had a good scrap with Carlos there in the first couple of laps. I overtook him around the outside and then he got me again into Turn 1. We were battling out there and I'm happy to pick up third. I think the win slipped away from us today but third is great.

Q: It's a fantastic result. It's such a young podium. The young guns on the podium is fantastic to see. How strange is it starting a race again half way through?
LS: It's bizarre. You've got to reset. We're not used to that intermission half way through a race, but great to finish third.

Q: Carlos, what a drive. You've been getting the maximum out of the car for so many races. I'm sure it's exciting and it's great to get a P2 but you were so close. You pushed him so hard at the end.
Carlos Sainz: Yeah, it's incredible. I'm half way disappointed with P2 you know. I wouldn't have believed that I would have got a chance to fight for victory today, we were very, very close. Honestly, with a normal race I think I would have got P2 behind Lewis because we had really, really good pace. So I think it's what we deserve. But with Pierre there in front is like, 'wow, how could that happen?' I guess a bit of bad luck with the safety car but then we did a good job to recover it and with the red flag also. Very happy with P2, we've been super-quick all weekend and I felt like I could dominate the midfield pretty easily today, so I've got to be happy with that.

Q: This isn't a lucky P2. You didn't luck in with the safety car or strategy. You guys have just been quick all weekend?
CS: I was faking it! No, especially getting back from P6 to P2 and then chasing Pierre and managing to finish three or four tenths behind him at the flag, we need to be proud of that, we need to be proud of the pace of the car and then that red flag I think I would have finished behind Lewis today, but it is what it is.

Q: Pierre! Pierre, I mean sensational. In your short period in Formula 1 you've been through so much, so many emotions, highs, lows... This is phenomenal. It must feel very special?
Pierre Gasly: Honestly, it's unbelievable. I'm not realising what's happening right now, you know. It was such a crazy race. We capitalised on the red flag. The car was fast. We had a pretty fast car behind us. As you said, I've been through so much in the space of 18 months. My first podium last year, I was already like ‘wow, with AlphaTauri and now my first win in Formula 1, in Monza, I struggle to realise.

Q: The emotion for your team. In Italy, they won as an Italian team. You can see what it means to them and it must be so nice celebrating with them?
PG: I've got no words. This team have done so much for me. They gave me my first opportunity in F1. They gave me my first podium and now they are giving me my first win. It's crazy, honestly, it's just crazy and I'm so happy, I can't thank them enough. Everyone from AlphaTauri, to Honda. I mean, it's a power sensitive track and we won the race ahead of all the Mercedes, Ferrari and Renault cars, so just an amazing day.

Q: I'm not sure I'm 100 per cent correct but I think you are the first French winner since 1996.
PG: That's right. Olivier Panis was the last one. I've always said coming in F1 that's one thing we need to change because it's been so long but I never expected that it would happen to us with AlphaTauri and we just kept focusing on ourselves since last year, working, improving step by step. It's crazy. I'm just so happy.

Q: Pierre, such a happy podium today. No doubt you've dreamt of this moment. How does the reality compare to the dream?
PG: It's amazing. Honestly, I'm lost for words right now. I'm still struggling to realise what's happened for us. My first win in Formula 1... A couple of months ago I got my first podium in Brazil and then today it's my first win, in Monza with AlphaTauri, which is an Italian team. It could not have been better and we worked so hard, day by day, race after race, after everything that happened to me in the last 18 months, I could not have hoped for a better way to get my first win.

Q: And it seems you really did want to soak up that podium. You didn't want to leave?
PG: I didn't want to leave, because these kind of moments... You never know how many times you are going to be able to enjoy these kinds of times. I wish we could have had all the tifosi and all the grandstands full of people, because it's probably one of the best races to be on the podium, right up there. Obviously 2020 style is a bit different but nevertheless I just wanted to sit down and take a moment for myself to go through the thoughts that were crossing my mind and just enjoy that moment.

Q: And just about the race: the timing of your pit stop was perfect but also those last few laps when Carlos Sainz was closing in on you, how much pressure were you under?
PG: After the restart I think we had 28 laps to go. I managed to pass Lance into Turn 1 and I think this really helped me for the rest of the race. Lewis pitted, I think on lap one, and then after that I was on my own. It reminded me of my Formula 2 days when you are leading the race and just focusing on your own driving, corner by corner. I pushed so hard at the start because I wanted to break the tow from the guys behind and I didn't have anyone in front on me so I knew I had to make the time in the corners and the last five laps were really hard and my tyres were completely gone. I was sideways in every corner and I could see Carlos slowly closing the gap and I know myself I would have been so pissed with myself if I would have lost that win in the last few laps. I just gave everything I had and I'm so happy I managed to get my first race win in Formula 1.

Q: Carlos, coming to you, lovely to actually see you on the podium this time, unlike in Brazil where you got promoted after the race. Pierre has already told us that his tyres were shot at the end of the race. What conditions were yours in?
CS: Well, my tyres were four laps older and obviously I was struggling also. But the pace we had today was incredible. Honestly, the gap that I managed to open with the rest of the midfield in the first stint and after that, managing to go through the whole five cars I had in front to end up chasing Pierre. Definitely felt really nice and felt like I had a good shot for victory. Then once I got to 1.5s I got stuck. The tow, as we see with these cars and the dirty air, starts affecting you a lot in traction, in braking. Mini lock-ups, oversteers and I think we were both a bit rallying for a minute because we were both struggling with tyres. But yeah, happy. Happy to finish in P2. Obviously disappointed to not get the win because today we had a lot of pace and we felt that without that red flag it would have been a different story because I know I was the virtual race leader with Hamilton's penalty. But that red flag came, and I managed to recover my positions and made it nearly to Pierre - which would have been nice but I think he deserves it and congrats.

Q: As you say, you were running P2 on merit. Are you surprised by the pace of the McLaren this weekend?
CS: Yeah, a bit surprised, of course - because we didn't expect to be that strong. Especially what I didn't expect is for everyone behind us to not be able to overtake us and to open that five-second gap that gave me that buffer before the first stop, then the Safety Car came out and I knew I had lost all that hard work earned. And then I very quickly realised that Lewis was going to get a penalty and I would have been the virtual race leader on the fresher tyres, and I just had to go through the field and get myself to P1 and push like mad - but the red flag came out. It was a rollercoaster of emotions because I was then lying in P6 with the same tyres as everyone in front of me. Even on a used tyre for me from the Safety Car, and I was a bit angry - and a bit disappointed, to say the least. But I managed to recover, and nearly made it. I think we can be proud because today I left nothing on the table in Monza. So I'm going to bed calm that I know that I didn't leave one single tenth out there.