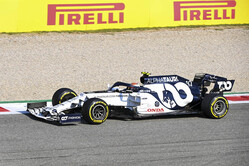 AlphaTauri driver Pierre Gasly took his debut win at Monza using all three compounds brought by Pirelli. The red flag on lap 26 meant that all the drivers could change tyres in the pits, so effectively, the Italian Grand Prix boiled down to a 27-lap sprint race, which re-started at 16:20 local time.

Racing Point's Lance Stroll, who finished third, effectively gained a 'free' pit stop, as he was the only driver not to stop before the red flag came out.

Mercedes driver Lewis Hamilton led the race from pole, but was handed a 10 second stop-and-go penalty, which he served immediately after the race re-started. On Yellow medium tyres, he re-started first, emerged at the back after his penalty, and eventually ended up seventh with the White hard.

A number of different tyre strategies were already seen before the red flag, but when the race was re-started, there was an equally wide selection of tyres used: with all three compounds chosen for the re-start. However, the top six at the finish all selected the medium tyre for the second half of the race.

There were no further pit stops following the re-start, even for the drivers who had chosen the Red soft tyre (used by Renault's Esteban Ocon to finish eighth).

Weather conditions remained dry and warm, with 30 degrees ambient and 41 degrees centigrade at the re-start.

Mario Isola: "All our compounds performed well today. The race strategy was obviously dominated and reset by the red flag. This was preceded by a safety car, all of which added up to a highly unusual and entertaining grand prix. Effectively, we had a 27-lap sprint race to the finish, which meant that the drivers had to think about managing their tyres throughout the duration of the second half of the race. Congratulations to Pierre Gasly and AlphaTauri for a very memorable and perfectly-managed victory - as well as to Carlos Sainz with McLaren and Lance Stroll with Racing Point, who finished second and third at this incredible Italian Grand Prix: where the top three all used completely different strategies."