Monza serves up the feel-good race we all needed 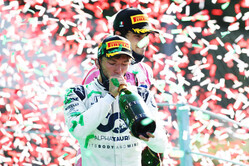 At a time we remember Jochen Rindt, the sport's only posthumous world champion, who perished at Monza fifty years ago this weekend, do get our esteemed editor to tell you his Rindt anecdote. It involves a north London garage and takes place just a week or so earlier.

The year before, editor Balfe watched from Copse as Rindt battled Jackie Stewart for the lead in the British Grand Prix in a race still regarded as one of the most thrilling ever.

Of course - and not purely down to nostalgia - thrilling races were quite common back then, indeed, the Autodromo Nazionale Monza hosted a fair few.

Who can ever forget those grainy black and white images on our TV screens as the leaders exited the Parabolica three or four abreast, then attempted to slipstream one another in that mad dash for the flag.

Today the race is likely to be settled at the first chicane, while the only time the cars are four abreast these days is as they jostled for track position in the various phases of qualifying.

While it would take a minor miracle for today's race to come close to those thrillers of the 60s and 70s, it is not impossible that there could be some edge of the seat stuff.

First off, Valtteri Bottas has to beat Lewis Hamilton today. If he doesn't nail the Briton by the first chicane he has to keep trying. He is already almost 50 points down on his teammate, should the gap increase he may as well give up on the remainder of the season, as might we all.

Then there promises to be a proper ding-dong behind, with Carlos Sainz and Sergio Perez embroiled in their own battle, whilst fending off the unwanted attention of Max Verstappen, who will have the likes of Ricciardo, Stroll and the AlphaTauris in hot pursuit, not to mention Alex Albon.

Verstappen could be worth the price of admission alone, for already frustrated that the ban on party modes has done nothing to curb Mercedes domination, he suddenly finds himself out-paced by a McLaren and a Racing Point.

While the Spa stewards might have had it easy, what with track limits, the qualifying shenanigans and today's anticipated mayhem they may all need to lie down in a darkened room for a few days.

Today, more than at any previous event, the absence of fans will be hard felt. No air horns, smoke, cheering, booing, flags or running down the track to stand under the podium. Here, more than at any other track, the true impact of the pandemic will be felt.

Then again, based on Ferrari's current form it is perhaps fortunate for Binotto and his men that the tifosi is left to vent its frustration at TV sets across the land, for no matter the fact that today's race will probably only last 75 minutes, it's going to be a very long afternoon for the Scuderia.

All the drivers in the first five rows of the grid will start on the red-banded soft tyres. The fastest strategy is a one-stopper, starting on softs and going on to mediums after 24 laps (or vice versa).

The second-quickest way is still a one-stopper, but this time using softs for 22 laps and then hards for 31 laps.

Close to both of these - but with the big advantage of providing a wider pit stop window - is a strategy that involves the mediums for 26 laps and the hards for 27 laps. As always, this can work just as well the other way round.

A two-stop strategy is definitely slower, but the best way to do it would be two 16-lap stints on the softs and a 21-lap run on the mediums, possibly using the mediums in the middle stint.

If you haven't been there, Monza is the most atmospheric of circuits. Forget, the tifosi, just walk back from the track and into the woods among the mighty oak trees, in no time at all you can feel it, it is all around you.

Forget Lando, Charles, Daniel and even Lewis, this is the spiritual home of Fangio, Moss, Ascari, Stewart... all the legends have raced here, and, sadly, many perished.

And as we indulge in the nostalgia and get a little misty-eyed, let us not forget that today marks the final race for Williams, certainly as we currently know it. After six decades in the sport, Sir Frank says farewell as he and his daughter, Claire, bow out and hand over to investment company, Dorilton Capital.

To use a well-worn phrase, Frank has probably forgotten more about F1 than we'll ever know, and as we soak up the history of the sport at this special venue, there is no denying that the Englishman has been a major part of it.

The pitlane opens and one by one - for a change this weekend - the drivers head out.

Stroll complains that his left mirror is wrong, while Bottas makes an early mistake and takes a trip over the kerbs at the second chicane.

Ahead of the warm-up lap, the air temperature is 28 degrees C, while the track temperature is 44.8 degrees. It is a bright and sunny day. That said, race control claims a 20% chance of rain. If only.

Other than the leading ten, only Ocon and Leclerc start on the softs. Kvyat and Vettel start on hards while the rest are on mediums.

They head off on the installation lap, all getting away cleanly.

The grid forms... and moments later, they're away!

Hamilton gets away well, certainly a lot better than Bottas, while Ricciardo gets on to the grass in his efforts to make ground.

As they funnel into the first chicane, Hamilton heads Sainz, Bottas, Norris and Perez, while Ricciardo is alongside Verstappen.

Norris is alongside Bottas in the first chicane but the Finn holds station. Behind, Albon has overdone it and has to use the run-off. Into the Curva Grande, Leclerc is trying to get through on the inside of Raikkonen.

Norris nails Bottas at the first chicane, as Ricciardo gets ahead of Verstappen, while Gasly cuts the entire corner after a mistake.

Coming out of the Lesmos, Perez passes the struggling Bottas as Ricciardo lines up the Finn. The Australian subsequently passing the Mercedes as they head into Ascari.

Verstappen sees his chance on the run to Parabolica, but simply doesn't have the pace of the Mercedes

At the end of lap 1, it's: Hamilton, Sainz, Norris, Perez, Ricciardo, Bottas, Verstappen, Stroll, Verstappen, Ocon and Gasly. Bottas suspect a puncture but he continues. Albon has dropped to 15th, while Raikkonen is 12th, ahead of Leclerc and Vettel 17th.

At the end of lap 2, Bottas is told his pressures are good and he has no damage.

A charging Verstappen bullies his way past Stroll at the first chicane to take 7th.

The incident at the 1st chicane involving Gasly and Albon has been noted.

"A bit of contact, keep an eye on things," reports Norris.

After 4 laps, Hamilton leads by 2.9s, while Sainz is a similar amount ahead of Norris. Bottas is hanging on to Ricciardo's shirttails.

As Russell is all over Vettel, the German is told he has an issue with his rear-left. As he misses the first chicane, he reports: "Brakes failed, brakes failed."

"No more pedal, brake lining exploded," he adds. A sad end for a driver who scored his first ever win here... and Toro Rosso's.

Out front, Hamilton posts a new fastest lap (24.890) as he attempts to ease his boredom.

Vettel makes it back to the pits.