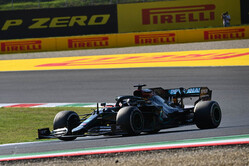 An exciting and action-packed Tuscan Grand Prix was characterised by two red flags and multiple safety car periods, meaning that teams had to react very quickly to rapidly changing circumstances, adapting their strategies to unfolding events and the tyres they had available.

Under the red flag regulations, teams are allowed to change tyres and make certain repairs to their cars. Mercedes dominated the race, with both Lewis Hamilton and Valtteri Bottas leading at different points. They followed exactly the same strategy throughout the race, using all three compounds.

Red Bull's Alex Albon scored his debut podium, ahead of Renault's Daniel Ricciardo - who had gained crucial track position by strategically undercutting his key rivals earlier in the race. Ricciardo was voted driver of the day, while Williams driver George Russell claimed his best-ever race finish in 11th.

Only 12 drivers were classified at the finish of the Pirelli-sponsored Tuscan Grand Prix, which celebrated 1000 races for Ferrari.

Mario Isola: "The inaugural Mugello Grand Prix is one that people will remember for a very long time, with three starts in total, the same number of safety cars, all the tyres used, and exciting action from start to finish. On a track that was extremely demanding on tyres, run in hot conditions, Mercedes dominated from start to finish, but the strategies were clearly influenced by the extraordinary turn of events. The high number of accidents also left a lot of carbon fibre debris on the track. Managing the re-starts was crucial, as well as taking care of the tyres throughout a very long afternoon. All drivers did a fantastic job under immense pressure, delivering an unpredictably thrilling spectacle in Italy for the second weekend in a row."